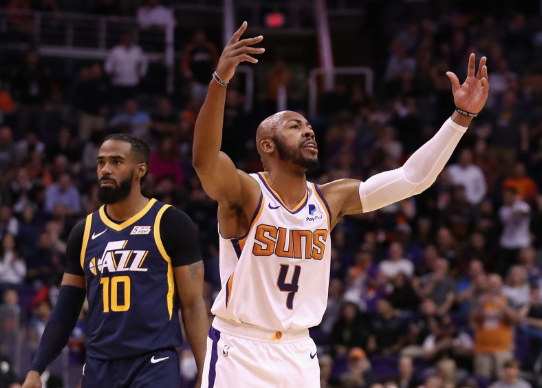 It looks like the change of scenery is doing a lot of good for former Mountaineer and current Phoenix Suns guard Jevon Carter.

On Monday night the Phoenix Suns battled the Utah Jazz all the way up to the final horn before bowing out by a score of 96-95. The Suns are 2-2 on the season with both losses coming by a single point.

Jevon Carter had 15 points, 4 rebounds, 3 assists and 2 steals. The same type of stat sheets stuffing performance he used to put together in a Mountaineer uniform. He also hit this big three-pointer to tie the game at 95 with under a minute to go.

Jevon Carter tied the game at 95 with just under a minute to go. However a ft with .4 secs is the difference. Suns lose 96-95.

Suns head coach Mounty Williams had some great things to say about JC, per NBA.com:

“Yeah, he’s a gamer. You know he makes big shots without D.A. (Deandre Ayton) and some of the lineups we had out there, it’s hard to call plays. He is playing off the ball which he doesn’t do sometimes or a lot. For him to come off and takes the shots, for me it’s a biggie, but he makes them and he’s not afraid of them. For me, he is a guy that I can rely on in those moments, he is not afraid of taking big shots.”

Phoenix Suns fans are taking notice of Carter and quickly taking a liking to him and his style.

Jevon Carter had another big night and was the @CarlsJr Player of the Game. “He’s a gamer. For me, he is a guy that I can rely on in those moments, he is not afraid of taking big shots.” Head Coach Monty Williams on JC https://t.co/eJaT4kG2Cx

Up next the Phoenix Suns take on the Golden State Warriors Wednesday night. If you haven’t thought about subscribing to the NBA League Pass, it’s time to at least give it a thought.