WATCH: Huggs Weighs in on His Experience with ESPN+ Over the Weekend 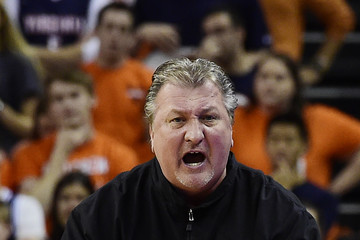 No one was safe when it came to the issues caused by using ESPN+ to watch the WVU vs Kansas game over the weekend.

During his press conference on Tuesday, Bob Huggins talked about his experience with using ESPN+.

When he was asked about whether he was concerned about visibility due to the app Huggs said, “I think everybody involved really needs to see what happens. I tried to watch the football game.”

“I think it’s like anything else. It’s gonna take them some time what’s the bets way to do things. Just like it takes us time to figure things out.”

“They say it’s the wave of the future. I’m not involved in it so I don’t know. I know the people in the league are excited and very much behind it and obviously they’ve studied it. They’re very intelligent people.”

When further pressed about trying to watch it he responded, “I wasn’t at my house, I was at my cabin. It’s different.”

A reported joked that you can’t came without wifi. Huggs said, “My wife is in charge of that kind of thing.”

Huggs Comments on His Struggles with ESPN+

Mountaineer fans don’t have to worry about ESPN+ until basketball season. Imagine missing WVU take on Kansas in hoops due to technical difficulties. Yikes.