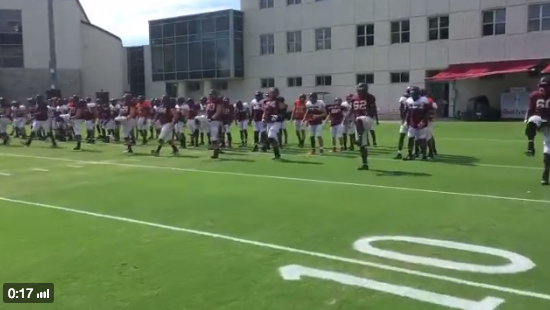 Everyone knows the tradition of following a Mountaineer win at Milan Puskar Stadium with Country Roads is one of the best in college football. In fact, Country Roads has became such a hit that it’s catching on at Lane Stadium as well.

At one of the Hokies’ recent practices they blasted the song while the players were stretching. It was cranked up extremely loud, but the players don’t look to be giving it the time of day. Most of them probably have no idea what the song even means.

The Hokies players may not be aware that this song is something they absolutely do not want to hear on September 3. The coaches are serving notice that the team needs to do everything they can to make sure they do not hear this song again.

From the Mountaineer side, this cannot make the team or players happy. That said, things like these are what makes college football great.

Hopefully Coach Holgorsen can come up with some kind of humorous reply in typical Dana style. Don’t expect him to make a big deal out of it in practice, but there is a good chance he returns fire on Twitter in some way, shape or form.

After a long wait, the Mountaineers will finally get a crack at reclaiming the Black Diamond Trophy. Though FedEx Field won’t play