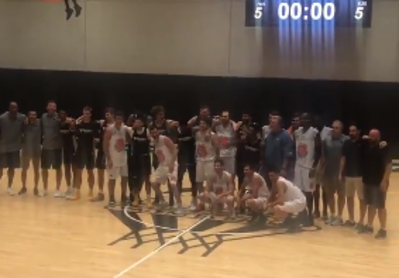 So far the WVU basketball team’s trip to Spain has been a success. The Mountaineers took down the Madrid All-Stars and the CC Basketball Academy in their first two games of their tour of Spain.

One of the greatest traditions in college sports is the Mountaineers and their fans singing “Country Roads” after a win. Well, this time it was even more special when the Mountaineers got to sing their victory song in another continent.

How great is that? What an incredible tribute to the Mountaineer fans. That’s a heck of a contingency across the pond rooting on their team.

While the competition hasn’t been great during their tour of Spain through the first two games, this is an incredible experience for these young men. It really gives them a head start heading into the upcoming season.

Related Articles on the WVU Men’s Basketball Trip to Spain

Inside Oscar Tshiebwe’s Absence from Spain

How to Watch the WVU Games in Spain

West Virginia has one more game left in their trip to Spain. On Sunday the Mountaineers take on the Barcelona All Stars at 2 p.m. ET.

Final from Valencia. WVU will travel to Barcelona Saturday and face the Barcelona All Stars Sunday at 2 pm ET. ?? pic.twitter.com/w2XVExfc1r