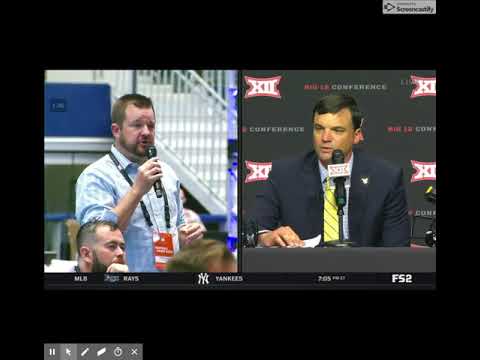 A recurring theme for Neal Brown has been that him and his staff have been positively received because they are “undefeated.” He talks a lot about the similarities between Kentucky and West Virginia contributing to his reception in Morgantown.

Schuyler Callihan of DubVNation had an interesting question about how West Virginia has 11 Power 5 opponents in the coming season. Brown said he knew the schedule coming in, indicating he welcomes the challenge.

Also, Brown was impressed by a reference to a Troy walk-on from a reporter. Made for some interesting commentary from Brown.

ESPN made a joke about how we still aren’t sure about Neal Brown’s favorite energy drink. I’d bet on it not being Red Bull.

Not surprisingly, Brown didn’t reveal much when it comes to the West Virginia starting quarterback battle. It was indicated that Kendall was battling a bit of a knee injury during the spring, something that wasn’t revealed much during the spring. He is now fully healthy and that could change things when practice ramps back up.

Brown looks very comfortable and ready to take on the Big 12.