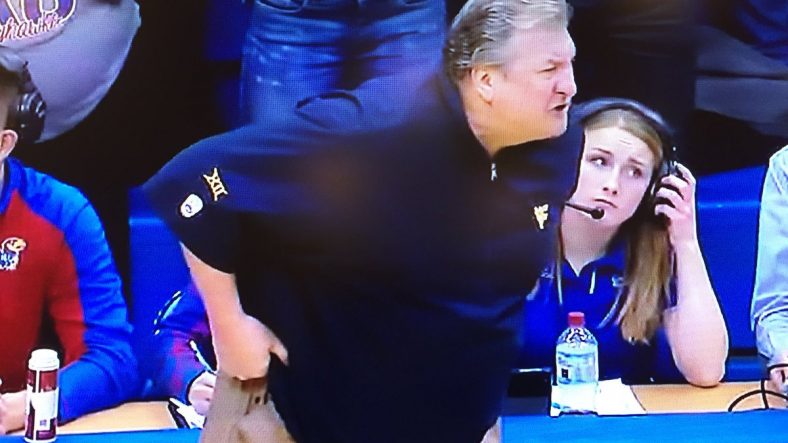 This story is all too familiar. The Mountaineers led by 10 points with under eight minutes to go and ended up losing to Kansas. One man has seen enough as Bob Huggins tossed for the first time this season.

Bob Huggins was not happy pic.twitter.com/8m8wYvdrDV

Kansas shot 35 free throws compared to just two for the Mountaineers. On a drive to the basket when Daxter Miles Jr. was clearly fouled, Bob Huggins decided he had seen enough. This was the play that all but clinched the win for the Jayhawks.

Daxter Miles had a great game in the loss, despite a key blunder late in the game when he passed an open 3 and turned the ball over when forcing a pass to Esa Ahmad. Miles had 22 points and shot 6 for 9 from three-point range. Jevon Carter had 15 points, seven assists, six rebounds and five turnovers before fouling out late.

Sagaba Konate was in foul trouble for a large portion of the game and Udoka Azubuike clearly got the better of their matchup this time around. Azubuike had 21 points, five boards and three blocks.

West Virginia shot 14 of 26 from three-point land, which went a lot way in offsetting the free throw shooting discrepancy, but ultimately the Mountaineers were unable to hang on to their land. An all too familiar story for the West Virginia season.

Up next West Virginia takes a trip to Waco to take on the Baylor Bears Tuesday night at 7 p.m. EST on ESPN2. The Mountaineers have a hard time with Baylor historically so they will have their work cut out for them.