WATCH: Bob Huggins On Why Sagaba Konate Played Three Minutes In The First Half vs TCU 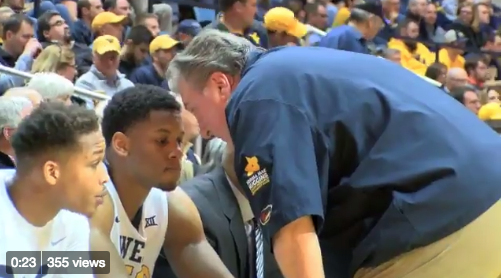 Against TCU, West Virginia took a 38-27 lead into the half. Even though Sabaga Konate played just three minutes. Despite the success, many Mountaineer fans were wondering why Sags is MIA.

A scroll through Twitter didn’t reveal anything. There were a few rumblings about how he mouthed off to Bob Huggins but nothing solid. Fear not as Huggs took the issue head on in the post game press conference.

WVU head coach Bob Huggins discusses the decision to reinsert Daxter Miles into the starting lineup and why Sagaba Konate only played three minutes in the first half pic.twitter.com/palohxZlUR

Hopefully Sags learned a lesson. Despite not having the man in the middle for most of the first half, West Virginia was able to control the game. In 18 minutes Konate had eight points, five rebounds, four blocks and two assists. Not quite his averagex but in limited minutes he was still a stat sheet stuffer.

Against TCU the Mountaineers had some great contributions from their bench. Teddy Allen was back to being Teddy Buckets. He scored 16 points on 8 of 13 shooting from the field to go along with six rebounds. He had his whole offensive arsenal working in what many say was his most complete game as a Mountaineer.

Beetle Bolden also did a great job providing offense off the bench. After a few starts Bolden had no issue going back to his role as the microwave off the bench. He had 14 points, three assists and two steals. He hit 2 of 5 threes and was 5 of 9 from the field overall.

It was great to see Daxter Miles Jr. contributing on the offensive and defensive end. He was in a heated battle with Desmond Bane all night long on both ends of the court. He started and played 27 minutes and had 13 points. After battling the flu and having an extended rough start to the season maybe the rest of the season Bob Huggins can get what he expected out of Dax coming into the season.

On Saturday the No. 20 Mountaineers head to Lawrence to take on the No. 13 Kansas Jayhawks. West Virginia will be aiming for another big road win after taking down Oklahoma last week on the road during Big Monday. The game will be televised on ESPN.