Was Sunday’s Loss by WVU Baseball the Worst Loss in WVU Sports History? 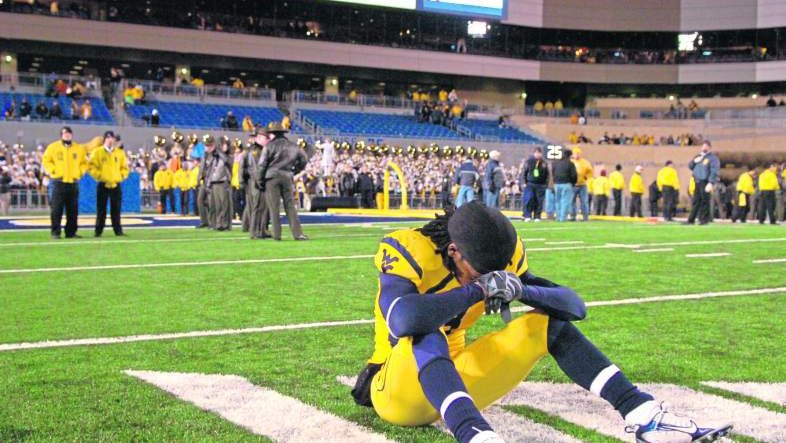 Sunday evening the table was set for West Virginia baseball to head into a rematch with Duke. The Mountaineers jumped out to a big lead and were in prime position to cruise to victory with a 9-1 lead. Then something happened.

A grand slam brought the Texas A&M Aggies within two runs in the bottom of the 7th. West Virginia added an insurance run in the 8th, but all that did was add to the dramatics.

It was the situation every kid puts himself in when growing up and playing whiffle ball out back. Bases loaded, bottom of the 9th, full count, down by three. During the radio broadcast Dan Zangrilli even said that West Virginia is one strike from a rematch against Duke or one grand slam away from a disastrous loss. And the rest, as they say, is history.

The thrill of victory and the agony of defeat all rolled into one. Texas A&M players come pouring in from the bullpen to celebrate. Mountaineer closer Sam Kessler crouched looking at the ground in despair. It’s a memory that no one involved with will forget.

Unfortunately for the Mountaineers and their fans there have been many of these over the year. This begs the question, is this the worst loss in WVU sports history?

It’s a very loaded question. Some will downplay this loss because it’s baseball and not the magnitude of football or basketball, but we are taking that part of the equation.

Without further adieu, let’s go over the worst losses in WVU history.

When Mountaineer fans think of bad losses, the attention automatically goes to 13 to 9. And with good reason. There was a national title at stake. It was what many would say was WVU’s best chance at a national championship. It was a very different situation than the baseball game. There wasn’t one moment where the loss happened, like the baseball game. The whole night was off. Pat McAfee’s missed field goals. Dave Wannstedt on crutches on the sideline. Steve Slaton held to 11 yards rushing. The list could go on and on. It was incredibly brutal loss to a really, really bad team when everything was on the line for West Virginia.

If you’re feeling especially brave, you can watch the game in its entirety:

Then the game was followed up by this strange Rich Rod interview. We all know where the story went from here.

Earlier this year we were able to catch up with Rich Rodriguez. You can check out the interview here.

This was back in 1996. Tremain Mack blocked Brian West’s punt with 29 seconds left and Nathaniel Brooks ran it in from 20 yards out for a touchdown and gave No. 25 Miami a 10-7 win in Morgantown.

This was just sickening. You cannot let this happen. As a player, coaching staff, team, someone needs to step up and make sure this doesn’t happen. This should have been easily avoided. The announcer on TV even mentioned how you need to keep your eye on Tremain Mack. Well despite this, he made the play and the Mountaineers suffered a devastating loss as a result.

This was back in 2006 during the NCAA Tournament. Such an experienced Mountaineer basketball team with high hopes for March Madness. The seniors on this team included Pittsnogle, Gansey, Joe Herber, Pat Beilein and J.D. Collins. Frank Young, Darris Nichols, Alex Ruoff and Joe Alexander were also on the team.

West Virginia had already lost to Texas on a buzzer beater this season. The first one was not nearly as devastating as the one that ended their season.

This was a loaded Texas team. They were led by LaMarcus Aldridge, P.J. Tucker, Daniel Gibson and of course Kenton Paulino who nailed this dagger against the Mountaineers:

This senior class went back-to-back on devastating losses to end their season. Despite going 18-of-27 from three-point range, West Virginia was unable to hold onto a big lead and earn a trip to the Final Four.

This one was very tough. West Virginia finally gets their shot to play for it all and Major Harris gets knocked out of the game and while he was able to return and play some, he was not at full strength. Anyone who knows anything about that Mountaineer team knows that for them to have any chance at Notre Dame they needed their star quarterback at full strength to win this one.

With an injured Harris, the team put forth an effort that should be commended, but they did not have the horses to keep up with the Lou Holtz-led powerhouse Irish.

So which is the Worst Loss in WVU Sports History?

Is this really a question? 13 to 9 is the worst loss in Mountaineer history.

That said, there is a case to be made for the buzzer beater loss to Texas. That was an incredibly fun team and it all ended in the blink of an eye. That said, it was a trip to the Final Four on the line, which isn’t quite the national championship, which is where the Mountaineer football team was headed if they defeated Pitt. And they didn’t. Despite being somewhere around 27.5 point favorites.

What do you think? Did I leave one off? In your opinion, what was the worst loss in WVU sports history?