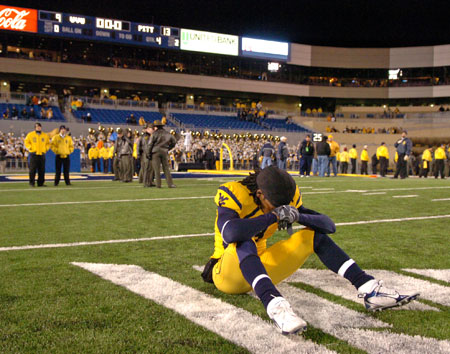 Let me preface this by saying that I hope that I’m wrong.  I hope the Mountaineers win more than 5 games.  In fact, I hope they win all of their games this season.  Unfortunately, that is not going to happen.

The Mountaineers will face the most challenging schedule in the Big 12 and the 14th most difficult in the entire country.  In addition, the talent loss from last year is devastating for new Head Coach Neal Brown.  This will not be an easy season for West Virginia.

In Sean Taylor’s excellent, albeit slightly misinformed (blinded by his loyalty to the Gold and Blue?), article (https://mountaineersports.com/want-free-money-bet-on-wvu-over-5-wins/), he claimed that this will be an easy win for the Mountaineers.  Not so fast.

JMU, 9-4 last year, was ranked No. 2 in the country in the FCS and will return 20 starters.  JMU is hungry and this will be anything but a an easy win for WVU.  Neal Brown will have the team prepared and ready for the upset-minded Dukes, but James Madison will come into Morgantown and upset the Mountaineers in the opener.

Yes, the Tigers lost Drew Lock but they gained an even more talented quarterback in former Clemson starter Kelly Bryant.  Bryant adds a new dimension to the Missouri offense with his ability to run and running back Larry Rountree III was one of the best backs in the SEC last year, rushing for 1,216 yards.  In addition, the Tigers offensive line is big, talented and experienced.  This one might get ugly on the road for West Virginia.

Literally everything on the offensive side of the football is completely brand new for the Wolf Pack.  The defense, co-led by former WVU Defensive Coordinator Tony Gibson, isn’t much better.  The entire defensive line from last season is gone.  West Virginia should win this game.

Kansas might be good at some point under new Head Coach Les Miles, but they will stink this year.  The returning players on offense are bad and the returning defensive players are even worse.  West Virginia gets its first road win of the year.

This is the part of the schedule where West Virginia will really struggle.  Texas has dominated in recruiting, securing top 3 classes nationally the past two seasons.  They reached the Big 12 Championship last year, they beat Georgia in the Sugar Bowl, and they return a lot of talent.

It’s difficult to say this, but junior quarterback Sam Ehlinger is tough and he’s a winner.  Texas is legitimately good enough to win the Big 12 this season, WVU is not.

Every West Virginia fan dreams of Austin Kendall, former Oklahoma backup quarterback, returning to Norman and magically leading the Mountaineers to an upset win against his former coaches and teammates.  That will not happen.

Jalen Hurts, the former Alabama quarterback that went 26-2 while in Tuscaloosa, is not only a great athlete but also a proven winner.  The Sooners’ offensive line is questionable and the defense has struggled in recent years, but the Mountaineers will not be able to outgun Oklahoma in Norman.

Although any game on the road in the Big 12 is difficult, this one feels like it could be close.  In the end, though, West Virginia will keep it close, but actually winning this game seems very unlikely.

Matt Wells, former Utah State Head Coach, takes over the Red Raiders this season.  Wells was outstanding at Utah State, particularly over the past two seasons, but his first season in the Big 12 will be a real struggle.  West Virginia gets a big home win.

Chris Klieman, who was extremely successful during his time at North Dakota State, takes over for the legendary Bill Snyder.  Kansas State finished last in scoring offense and total offense last season.  Quarterback Skylar Thompson is back, but the running game is a big question mark.  With so many questions, it’s hard to predict what the Wildcats will look like this year.  Again, winning on the road in the Big 12 is incredibly difficult and with two very evenly matched teams, always go with the home team.  Kansas State wins.

Spencer Sanders, an outstanding Freshman dual-threat quarterback, will likely get the start for the Cowboys.  He will go through his early-season struggles, but by the time he plays West Virginia in Morgantown, he will have gained plenty of Big 12 conference experience.  He will be surrounded by plenty of returning weapons on offense and the Cowboys will be explosive on offense.  West Virginia won’t be able to keep up this year at home.

Although Gary Patterson’s quarterback is uncertain, the offense returns four starters on the offensive line and two dynamic Senior running backs.  TCU always has an outstanding defense, which ranked first in total defense last season.  This is a really tough game for the Mountaineers for their final game of the season and it feels like it could be a shutout for the Horned Frogs at home.

Although the Mountaineers could perhaps get one win that was predicted a loss, 4 wins is the absolute maximum win total this season.  At best, the Mountaineers go 4-8, at worst they go 1-11 and their most likely record will be 3-9.  Take the under on +/- 5 wins for WVU this season and make some cash while “trusting the climb” during Neal Brown’s first season in Morgantown.