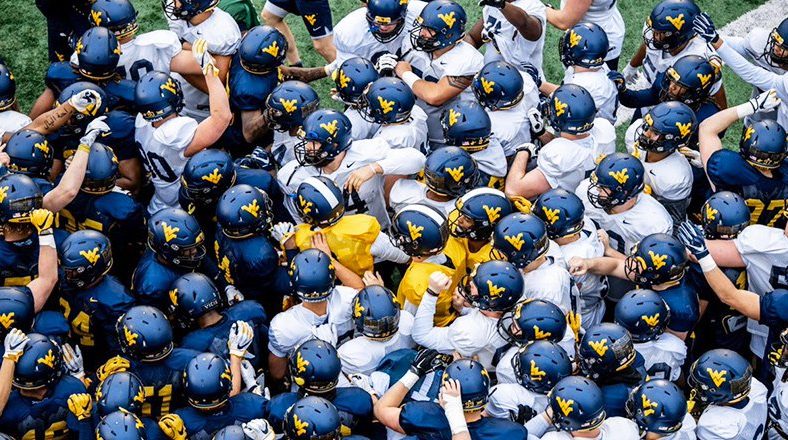 With a new coaching staff and a lot of talent moving on, Vegas oddsmakers have set some very modest expectations for WVU football. Luckily for us, that gives us the opportunity to place a wager on WVU football’s win total going over 5 wins and making some easy cheddar.

Let’s go through the schedule and detail exactly how West Virginia gets over 5 wins.

This is an easy win. Sure, people like to give James Madison a little more credit than they deserve. They gave NC State a tough game last year, but also lost to Elon, New Hampshire and Colgate. West Virginia destroys these guys at home. 49-14 WVU.

This is a team that is perennially mediocre at best. The only difference between those mediocre teams and last season is Drew Lock. Well, Drew Lock is  now in the NFL.

WVU uses the ground attack and their embarrassment of riches at running back to grind out a 24-20 win on the road. Neal Brown for President.

These teams are very even. West Virginia gets the advantage due to home field advantage. At this point Austin Kendall is settled in and slinging the ball all over the field. West Virginia wins, 31-28 in a thriller.

It’s Kansas. Maybe Les Miles will make some magic there, but probably not. With what they’re paying him, they are sure hopeful for it. Not yet. West Virginia goes on the road and handles Kansas, 38-17.

West Virginia is ranked No. 16 and a third of the way through the regular season undefeated. Neal Brown has Morgantown on fire.

What a great time for a bye week. Heading into the Texas bye week. Despite the bye, West Virginia is an inexperienced team and Texas is not. Crybaby Tom Herman comes into Morgantown and scores revenge for the loss last season in Austin.

WEST VIRGINIA DOES IT! ?

A 2-pt conversion after the Mountaineers' last-minute score beats Texas in Austin. pic.twitter.com/Ai3mg7VwVW

Texas takes down WVU 35-31 in Morgantown.

WVU gets their win of the year over the ranked Cyclones, 34 to 28 in Morgantown. And we got win #5. Playing with house money from here.

The last few trips to Norman haven’t been pretty. And that was with much more talent. This won’t be any different.

Baylor coach Matt Rhule has his team on the upswing. His Baylor Bears made a six win improvement from the 2017 to 2018 season and will be solid again this year. When you combine him having his system in its third year with the home field advantage, the Bears will take care of WVU in this Halloween night showdown.

West Virginia has won five in a row over Texas Tech. Somehow, despite this, Kliff Kingsbury was rewarded with an NFL head coaching job. Two teams transitioning from one era to another.

Matt Wells takes over after seven up and down years at Texas Tech. Before things get going, there will be some down years. West Virginia wins fairly easily at home, 31-20. Boom, six wins. Show me the money.

Coming off of a 5-7 season, Kansas State is looking to get back on track. The outlook on this season isn’t much better. West Virginia is able to go into Manhattan and score a 24-21 win. These games are usually close and this will be no different.

Last year Mike Gundy and his incredible hair knocked off the Mountaineers in Stillwater. Despite losing six gmaes last year, Oklahoma State was able to get wins over Texas and West Virginia when they were ranked in the top ten and lost to Oklahoma by just one point in Norman.

It’s the road games against unranked teams where Oklahoma State doesn’t get up for it. Last year they lost on the road to Kansas State, Baylor and TCU. This year they lose to West Virginia on the road, 35-31.

With eight wins in the bag and a tough road matchup against a strong Kansas State team, West Virginia is dispatched by a superior team on the road. Kansas State stifles the Mountaineer offense and closes the season with a win at home. TCU 28, WVU 13.

The experts are putting too much stock in having a first year coach. Even if two of these don’t go as planned, WVU still gets six wins and you get the cash.