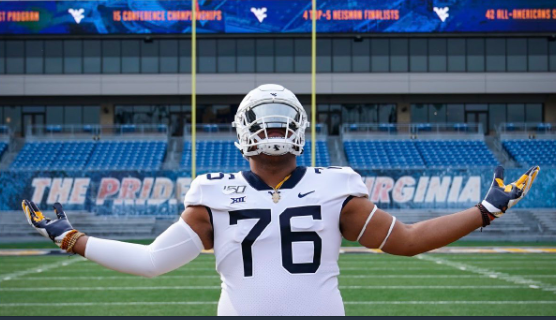 Chris Mayo is a MAN.  At 6’5 300 pounds, the 4 star offensive lineman from The Peddie School in Hightstown, New Jersey is a mammoth of an athlete.  He’s not just huge, though, he’s also an ultra-skilled pass and run blocker as well.

Mayo’s potential commitment would not only be huge from the standpoint of landing a big-time offensive lineman for next year’s class, it would also likely tip over the dominoes of other highly-ranked New Jersey players such as Tarik Austin-Cave.  In other words, Mayo’s commitment would be huge.

Mayo has offers from 17 of the most elite football programs in the country, including Auburn, Nebraska, Kentucky, North Carolina, Tennessee, Notre Dame, Penn State, Purdue, etc.

Following his official visit with Aaron Lewis and Tarik Austin-Cave last weekend, it appears that he is poised to make Morgantown his new home.  Today, he posted on his Twitter that his commitment is coming tomorrow.  It would be exceedingly shocking if he chose anywhere but West Virginia University to spend his next four years.  Go to this future Mountaineer’s Twitter page and show him some love!