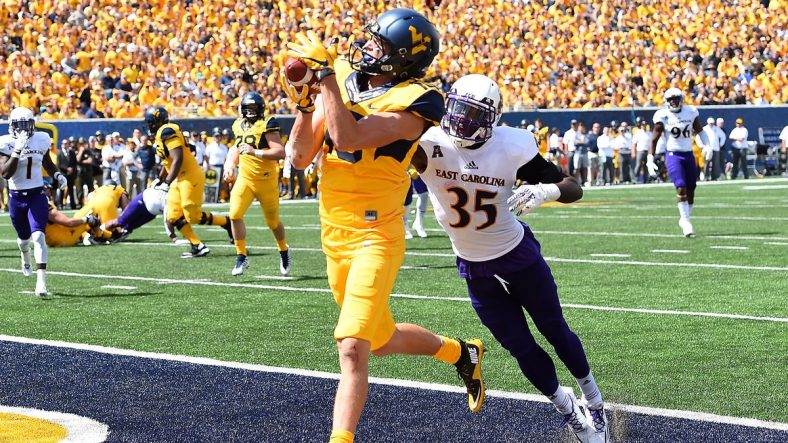 People around the country are starting to notice the damage the WVU passing game is doing. On Tuesday the Tallahassee Quarterback Club added 10 players to the Biletnikoff Award watch list, including two Mountaineers. Those two Mountaineers are David Sills and Gary Jennings. The vaunted Mountaineers passing attack is getting national recognition after piling up some impressive statistics in their first four games.

Through four games Jennings is the Mountaineers leading receiver with 29 catches for 438 yards, leading the team in both categories. Jennings has one touchdown so far this season. To the contrary, David Sills has found the end zone seven times, which happens to lead the country. The converted quarterback also has 26 receptions to go along with 396 yards.

The Biletnikoff is awarded to the nation’s best pass catcher annually. It could be a wide receiver, tight end, running back or any other player that catches passes. It is not just limited to the receiver position. That said, it is generally a wide receiver who takes the award home.

The Mountaineers have never had a winner of the award. Recent finalists include Stedman Bailey and Kevin White, both who went on to play in the NFL.

Last year’s winner was Dede Westbrook of Oklahoma. Maybe the Mountaineers can keep the award in the Big 12. It will be a tough task with many worthy challengers emerging. This year’s winner of the Biletnikoff Award will be announced on December 7 at The Home depot College Football Awards.