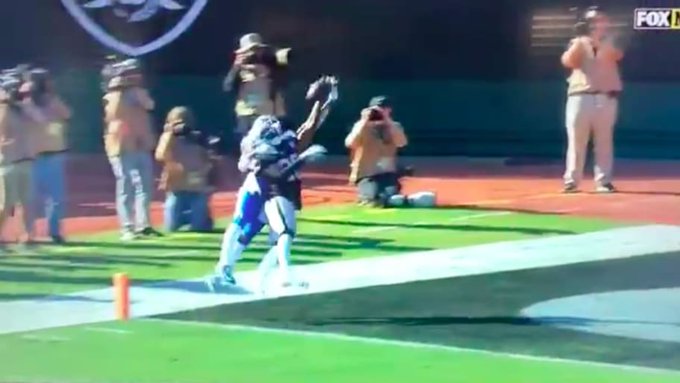 Daryl Worley and Karl Joseph have teamed up in the Oakland Raiders secondary over the past two seasons. Joseph was taken by the Raiders in the first round with the 14th overall pick in the 2016 NFL Draft. Worley was selected by the Carolina Panthers with the 77th overall pick in the 3rd round of the 2016 NFL Draft. Worley joined Joseph in Oakland when he signed with the Raiders before the 2018 season.

On Sunday the Raiders took on the Detroit Lions and their passing attack led by quarterback Matt Stafford. The Raiders were able to hang on for a 31-24 win over the Lions thanks in big part to contributions from the former Mountaineers.

In the second quarter, the Lions were driving and hoping to extend their lead over the Raiders. Matthew Stafford went to the back corner of the end zone for Kenny Golladay, but Daryl Worley went up and made an incredible one-handed interception.

Could have been a big shift in momentum if Lions score on this drive. Instead the Raiders go 80 yards in 11 plays to go up 17-14. Worley with the one handed INT.#RaiderNation pic.twitter.com/xEMEwhVumX

How great is it that two players who have been questioned combine to secure this win. Clelin Ferrell’s pressure forces Stafford to throw this off his back foot and Karl Joseph gets the PBU. #RaiderNation gets the win to jump to 4-4!!!! pic.twitter.com/OkOdguETRa

Raiders coach Jon Gruden called a timeout with the Lions offense scrambling to the line with the clock ticking. Joseph bailed Gruden out as he was sure to face loads of scrutiny if the Lions were able to score the game-tying touchdown.

More Stories on Mountaineers in the Pros: