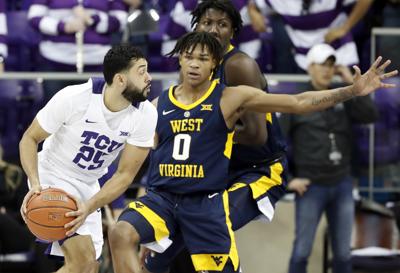 Trey Doomes Says Goodbye to the ‘University of West Virginia’

Trey Doomes Says Goodbye to the ‘University of West Virginia’

Back in March Trey Doomes entered the transfer portal. Initially the plan was to redshirt Doomes but Huggs put him in some games in hopes of a spark. He appeared in 12 games and averaged 2.2 points per game.

Today Doomes announced he plans on transferring to the University of Tennessee at Chattanooga. He took to Twitter to thanks the “University of West Virginia” for giving him the opportunity to grow athletically, personally and academically.

He followed that up with a video tweet “The Next Chapter.”

Back in March when it was learned he was going to enter the transfer portal, he tweeted a thank you to the West Virginia fans and everyone who believed in him:

I want to thank the state of West Virginia fans and everyone who believed in me throughout the season. I wish nothing but the best to the mountaineers next season and I’m glad I was able to build strong relationships with teammates I now call my brothers. 〽️🤞🏾 https://t.co/iFxdmEgVpS

With McCabe, Thomas, Knapper, Harler, Haley and Knapper returning and Miles McBride and others set to join the rotation, it was going to be tough for Doomes to get minutes.