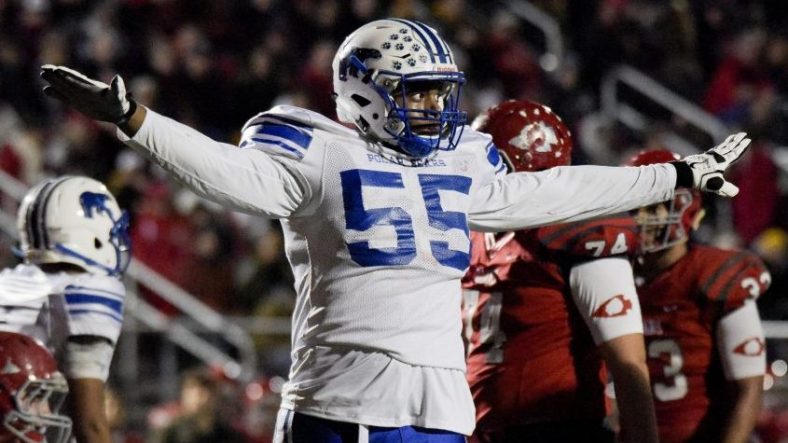 WVU gets a big recruiting victory by picking up the top rated recruit in West Virginia, Dante Stills, defensive lineman from Fairmont Senior. Stills chose the Mountaineers over the University of Florida and Oklahoma University.

Fairmont Senior is set to fire up their 2017 season and held a pep rally today at 2 p.m. This was more than a pep rally, though. This was also for Stills to make his announcement on where he will be going to college. Just after 2 p.m. Stills joined Polar Bear head coach Nick Bartic on stage and the anticipation grew. Thousands packed the auditorium while many others watched a live stream on social media.

Stills took the mic and thanked God, his family, Fairmont Senior students, faculty and coaches along with those who recruited him and offered a scholarship.

Dante Stills was such a big-time recruit he could basically go anywhere in the country. As the anticipation built, Stills reached for his bag and to the delight of the crowd pulled out a blue West Virginia football hat. He then announced, “I will be attending West Virginia University.”

Immediately after, Stills took to Twitter to make it official.

THERES ONLY ONE WEST VIRGINIA …
100%….. pic.twitter.com/PKk7KddUIC

Congratulations to Dante Stills for joining the Mountaineer family. Now that he has made his announcement he can focus on leading one of the top high school football programs in the state of West Virginia. Last year Fairmont Senior was just one win from a state title as they finished runner-up to Mingo County.

Many considered it a done deal that Stills was attending WVU, but is still a sigh of relief when it’s official and a talented player like this will spend the next 4 to 5 years in Morgantown.