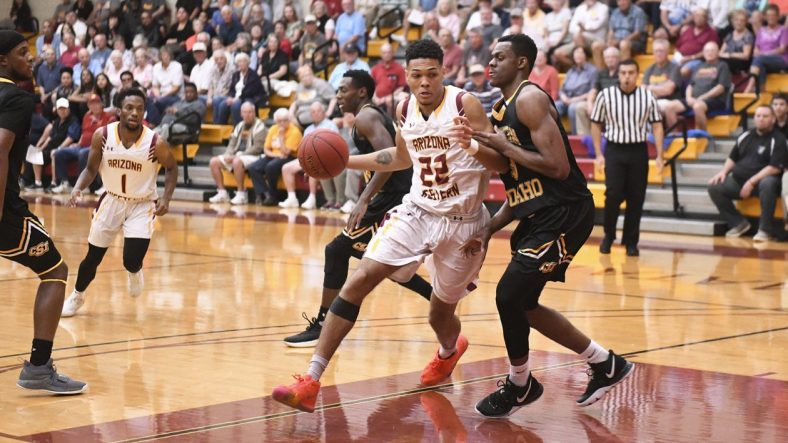 After signing both Sean McNeil and Tajzmel Sherman, and Kenyon Martin, Jr. likely to sign, Bob Huggins is certainly scouring the JUCO ranks for any players remaining that could benefit his WVU team next year and in the future.

One such name that has popped up for West Virginia and several other elite schools across the country is Andre Allen, a 6’9 forward from Arizona Western Community College.  Allen, who averaged 13.3 points and 8.4 rebounds for Arizona Western last season, initially committed to Buffalo University.  However, following the departure of former Buffalo Coach Nate Oats, Allen requested to be released from his commitment and re-opened his recruitment:

“I can’t say thank you enough to the staff at UB, and the city for giving me an opportunity to play at their university and welcoming me with open arms, with that being said, I will be requesting my release from the University at Buffalo and reopening my recruitment.”

Allen is the #10 ranked JUCO recruit in the 2019-2020 class according to JUCORecruiting.com.  Arizona Preps describes Allen as “a long, lengthy and athletic stretch 4-man prospect that plays athletic and is a strong finisher at the rim.  He runs the floor hard and is a good slasher and finisher in the open floor.  He can score inside and out, and has a solid shooting stroke with range, which keeps defenses honest.  His promise as a college prospect is glaring and he is a nice addition to any college program looking to add versatility to their frontcourt.”

Allen, who has two years of eligibility remaining, was recently offered by Florida and has heard from several big-time schools including Georgetown, UCONN, Oklahoma State, Ole Miss and many others.

Already an outstanding recruiting class (Tshiebwe, McBride, McNeil and Sherman), adding Andre Allen, in addition to Kenyon Martin, Jr., would really complete the offseason additions and Coach Huggins would have a team ready to compete in the Big 12 and with anyone in the nation next year.