Tom Herman Gives His Thoughts on ‘Horns Down’ Controversy 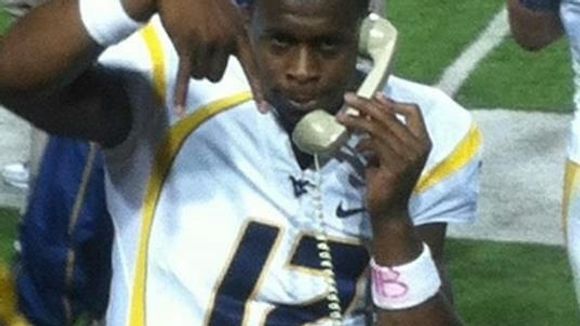 Texas head coach Tom Herman is also a former Texas graduate assistant and has a master’s degree from the university. He’s very well versed what the “Horns down” sign means. He also has to understand that this kind of stuff comes with the territory in college football.

That doesn’t stop Herman from crying when the subject comes up.

“We’ve been disrespected for as long as that hand signal has been around,” Herman said at AT&T Stadium following his team’s practice on Thursday.

You’re so resilient, Tom. How do you handle it?

It has been ruled that use of the gesture will result in a 15-yard penalty.

Here’s the thing, though. This wasn’t so clear to the Mountaineers leading into their game against Texas. Both David Sills and Will Grier were hit with 15-yard penalties for using the hand gesture. Regardless, West Virginia still got the W in Austin.

After the game WVU head coach Dana Holgorsen said that he asked the officials if the hand gesture would result in a penalty.

“Here’s what I’m disappointed about: We communicated with the refs if that thing was going to get called,” Holgorsen said. “I guess there was miscommunication.

“We did ask, yeah,” Holgorsen added. “I guess there was some miscommunication. That’s been brought up in our coaches meetings and stuff. I think they should take a hard, fast stance on it, mandate we can do it or not do it. I don’t know where we stand on that.”

In Herman’s mind, his team is above this type of antics.

What about the time he mocked Missouri quarterback Drew Lock’s touchdown celebration after he threw an interception?

Then there was the whole ordeal with his wife and former Ohio State assistant Zach Smith. We won’t even go there.

One thing is for sure, the latest rendition of the Red River Rivarly is going to be a big one.