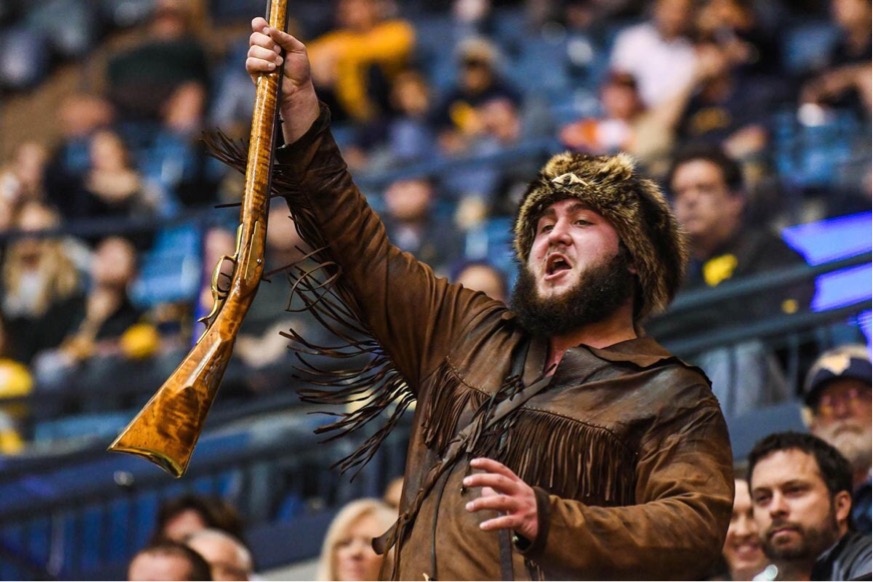 Q:  As a child growing up in Buffalo, West Virginia, did you dream  about becoming the Mountaineer?

TE:  Absolutely, it’s something I’ve dreamed about for quite a while.

Q:  How intense was the process of becoming Mountaineer?

TE:  The application process is broken into 3 main parts.  First is the written application which consists of essays and lists your community service and how you’re involved on campus.  Then they take the top 10 applications and those candidates are brought in for the interview, which is definitely the most stressful part.  The top 4 after the interviews make it to what’s called the “cheer off.”  Based off the score from these 3 categories, the candidate with the most points is the Mountaineer and second place is the Alternate.

Q:  How does it feel to be the representative of an entire state?

TE:  It’s amazing!  Like I said, this is something I’ve wanted for a long time.  Growing up in small town West Virginia, I was really instilled with a love for the state and the university from such a young age.  Now that I have the opportunity to represent on a daily basis, it’s like no other feeling in the world!

Q:  What are you most excited to do as the Mountaineer?

TE:  I look forward to meeting all of the people.  The Mountaineer has the opportunity to meet so many great people, so many great West Virginians.  I can’t wait to hear other people’s stories and experiences that tell why they love WVU, why they love the state.

Q:  What sporting event are you looking forward to most:

T:  Definitely football.  I’m really excited to run out on the field for the first time!  It’s something that I can’t even really imagine right now. I’ve had the opportunity as the Mountaineer Alternate to cover every sporting event except Gymnastics.

Q: Has Trevor Kiess, the former Mountaineer, been your role model during this process?

TE:  Absolutely, I’ve had the chance to work closely with him.  He’s always been someone that I could text or call anytime and he’s always been there to give me good advice.

Q: Who stands out as the best Mountaineer ever?

TE:  I would say Jonathan Kimble.  During my Senior year in high school, I saw a picture of him standing at the top of Seneca Rocks, rifle in hand and wearing the buckskins.  Something about that picture really caught my attention.  It seemed so awesome to the Mountaineer.

Q:  What kind of time commitment is being the Mountaineer?

TE:  I’ve prepared myself to make this my #1 priority for the next year.  This is something that requires a lot of time and attention.  You represent all day every day, 24/7, not just when you’re in the buckskins.  You have to live for this role.

Q:  What makes the Mountaineer different than every other mascot?

TE:  We don’t wear a big head that covers our face.  This makes us relatable and personable.  People can see me and talk to me and create a connection with me.  There’s really no other mascot like that out there.

Q:  When is your first game as the Mountaineer and are you nervous?

TE:  The “Passing of the Rifle” ceremony is April 11th and then I’ll do the Spring Football game on the 13th.  Right now?  No.  But as it gets closer, I’m sure I will be.  Just to be on the football field for the first time with the buckskins on, I’m sure I’ll be a little nervous for.

Q:  Do you have a message to the fans, to Mountaineer Nation?

TE:  I want the people of the state to see me as one of them. I’m not different.  I’m just a small-town West Virginia kid.  If people see me out, I hope they will come up and talk to me.  I’d love to hear everyone’s love and compassion for the state of West Virginia.  And I’ll give it right back to them!