This is the Future of West Virginia’s Offense 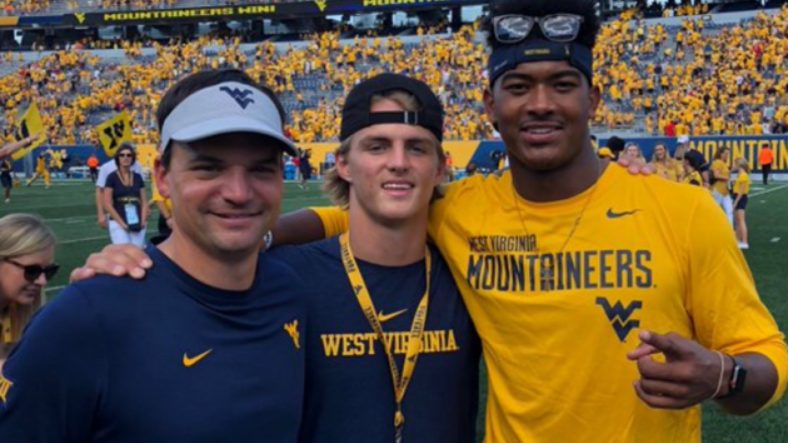 Quarterback Garrett Greene is going to throw a lot of touchdowns to Wide Receiver Devell Washington on plays called by Head Coach Neal Brown in the coming years.  Greene, Washington and Brown will combine to form a formidable offense of the future for the Mountaineers.

This weekend, as the Mountaineers take on the Texas Longhorns, both Washington and Greene will be in attendance to check out Morgantown and to take in the sights and sounds of West Virginia beating a conference rival.  While there will be 21 WVU recruits from three different recruiting classes at the game on Saturday, none are more important than Greene and Washington.

Garrett Greene, a 6’0 185 pound four star quarterback out of Tallahassee, Florida, has steadily climbed the recruiting charts and is currently the 18th ranked quarterback in the nation in the 2020 class.  Greene recently participated in the Elite 11, the nation’s premier quarterback competition, which features 12-24 of the best young quarterbacks in the country.

Greene has led his Chiles High School team to a 2-1 record early in the season and he has developed into more of a pro-style, pocket passer as a Senior even though he can certainly still create plays with his feet.  In addition to his work on the field, Greene is also a social media virtuoso.  His recruitment and enthusiasm towards the West Virginia Football program is priceless.  He never misses an opportunity to say, “Welcome home bro” when a new recruit commits or a “You know the move bro” when a player is still deciding on his commitment.  West Virginia’s “Golden Boy” is the football program’s most vocal supporter and recruiter and is destined for greatness on the field at WVU.

Devell Washington, a 6’4 215 pound wide receiver from Bay City, Michigan, is a physically dominant specimen who held offers from Michigan, Michigan State, Purdue and Ohio State.  Although Washington didn’t have a tremendously productive Junior season, he is determined to have an outstanding Senior season to finish out his high school career.  Regardless, Washington is a big, strong, talented wide receiver with elite hands and will be a perfect future #1 target for Garrett Greene.

The sky’s the limit with Greene and Washington in Brown’s modified Air Raid offense and this the core of West Virginia’s offense that will compete for future Big 12 conference championships.