This is the Defining Moment of the Season for the Mountaineers 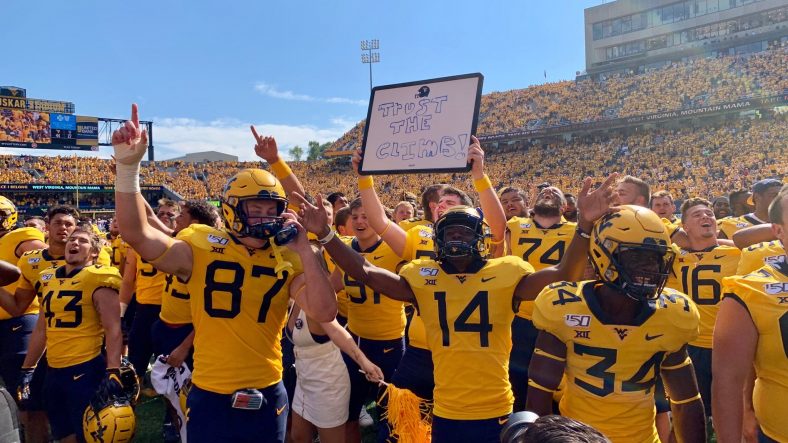 When adversity hits, it’s important how you handle it and how you respond.  While the rest of the country gave up on the Mountaineers this season, the team and players corrected mistakes from last week and made adjustments.  During the week of preparation for the NC State game, Head Coach Neal Brown said, “The Missouri game was our first real adversity.  How do we handle it? I think that’s the question. How do we handle it and how do we respond?”

The West Virginia Mountaineers responded in a major way, beating the then-undefeated NC State Wolfpack 44-27.  With the victory, West Virginia turned its season around and this game was a defining moment that changed everything.

According to Brown, “Sometimes you have a defining moment and today was a defining moment.  This is really early for a defining moment, but whether we won or loss, I thought today was going to define us.  You have moments where things don’t go right, like last week.  It didn’t go well, but how we responded throughout the whole week is what you saw on the field.”

Make no mistake about it, West Virginia, without two starting offensive lineman and their most explosive offensive weapon, did not have nearly as much talent as NC State and won’t be as talented as many of their remaining games.  West Virginia will have to continue to put in more effort and outwork every team they play for the rest of the season.

West Virginia will get knocked down and punched in the face many times throughout this season.  They will face adversity after adversity after adversity. However, what you’ll see from the Mountaineers for the remainder of the season and perhaps throughout Neal Brown’s time in Morgantown as the Head Coach is a team that prepares, works hard and embraces the blue collar mentality of our great state.