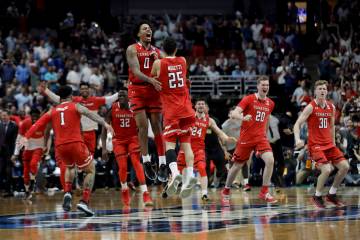 West Virginia fans, fresh off an incredibly frustrating and disappointing basketball season, wonder who they should cheer for during tomorrow night’s Men’s Basketball National Championship game featuring the Virginia Cavaliers and the Texas Tech Red Raiders.  Let’s take a look at both teams and compare:

Virginia (34-3) is West Virginia’s natural, historical adversary.  In 1861, as the United States was divided over slavery, leading to the Civil War, the western regions of Virginia split with the eastern portion politically and the two were never reconciled.    Virginia joined the Confederacy and W(B)est Virginia remained loyal to the Union and started the process of separation.

In addition to the historical reasons to dislike Virginia, they also beat Auburn Saturday night on an extremely questionable call at the very end of the game.  Down 62-60 with 1.5 seconds left, the inbounds pass went to Virginia Junior Guard Kyle Guy.  Guy shot an off-balanced three point shot and was “fouled” by the Auburn defender.  Guy calmly hit the three foul shots, putting Virginia up 63-62 and the rest is history.  It was a very controversial ending for the Cavaliers and not at all the underdog story that fans with no stake in the game love.  They don’t “deserve” to be here, in other words.

Not only is Texas Tech (31-6) representing the Big 12 conference in the National Championship game, they are the team most like West Virginia in the country.  Their top player Jarrett Culver was a 3 star player out of high school and has gone on to become the Big 12 Player of the Year with hard work.  Like the Mountaineers, they don’t rely on the talents of big-time recruits; rather, they use excellent coaching and execution to win games.  Texas Tech plays tough, suffocating defense and has outstanding rebounding.  St. John’s transfer and Big 12 defensive team member Tariq Owens anchors the nation’s number 1 defense in the country, per kenpom.com.  Texas Tech was picked to finish 7th in the Big 12 this season and is now one of the four teams left in all of college basketball.  Major underdog story.

Texas Tech is 15-1 in their last 16 games.  Their last defeat was a 79-74 loss against West Virginia on March 14 in the Big 12 Tournament.  A win by the Red Raiders would be huge for the Big 12 Conference and give West Virginia’s young core the confidence that they can beat the best in the country.

Put on your Red and Black, put your Guns Up and cheer for the Red Raiders hard because we’re all Texas Tech fans now!