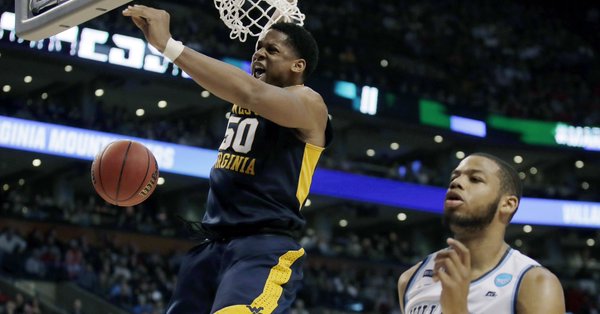 The Return of Sagaba Konate

The Return of Sagaba Konate

Is it finally happening? After being out for more than three months it appears the return of Sagaba Konate could be imminent.

The preseason all-Big 12 pick hasn't played since Dec. 8 but has "been after it every day."https://t.co/cWSzYnIJOC

Hearing that @WVUhoops Sagaba Konate will be a game time decision for tomorrow’s #Big12MBB quarterfinal matchup vs. No. 2 Texas Tech.

Konate hasn’t played since the Pitt game on Dec. 8.

You have to admit, this season just got a lot more fun.

With the Mountaineers coming off of a 72-71 victory over Oklahoma, a matchup against Texas Tech is slated for 7 p.m. Thursday night. A source told The Dominion Post that Konate’s health may be strong enough for him to contribute. With the shortage of bodies on the Mountaineer roster, the team would certainly get a boost from having access to Konate.

OH. MY. GOD. Block of the century by West Virginia's Sagaba Konate pic.twitter.com/rdOCaMY7lw

Following the Mountaineer win Konate declined to talk to the media in the locker room. During the game he was on the bench in street clothes.

The thought of Konate and Derek Culver dominating under the basket is very enticing. The two have yet to play in the same game. Konate’s last appearance was on December 8 against Pitt when he had 16 points, nine blocks and seven rebounds.

In the Mountaineer win over Oklahoma, Derek Culver struggled to stay on the court due to foul trouble. Despite struggling with fouls and turnovers, he was able to contribute six points and seven rebounds in just 13 minutes. This includes a put-back with 1:01 to go that put West Virginia up by three and proved to be the difference in the game.

Lamont West led the way with 15 points, followed by Jermaine Haley with 14 and Jordan McCabe with 12. Haley added 12 rebounds, four assists and two blocks. Much of the attention has been focused on McCabe and Culver, but Haley has been extremely solid down the stretch. This was the sixth straight game where Haley had 13 or more points.

There was no shortage of excitement in the finish to the game. It looked like Oklahoma’s Christian James hit a three pointer at the buzzer and we were headed to overtime. Instead the play went under review and it showed that his toe was on the line. Two pointer. Game over. Mountaineers.

Tonight’s tip off is set for 7 p.m. and the game will be televised by ESPN2. West Virginia looks to move to 2-0 with a win over the No. 7 Texas Tech Red Raiders.