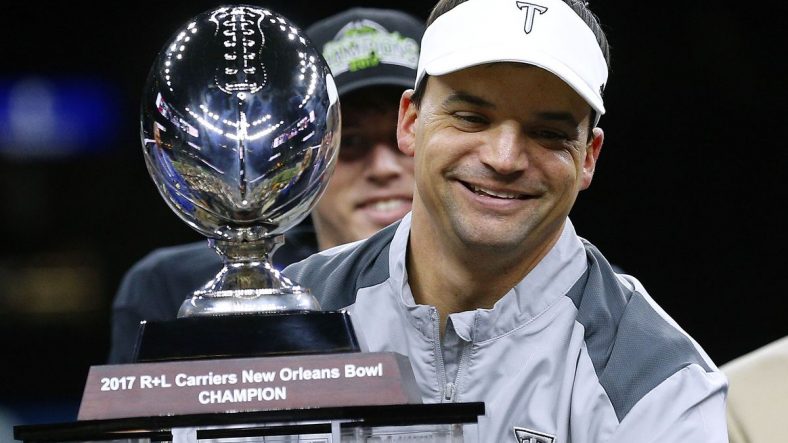 As the West Virginia Mountaineers have overachieved going into their game Saturday against the 11th ranked Texas Longhorns, Neal Brown’s former team, the Troy Trojans, are 2-2 overall and will enter their game against Missouri as big underdogs.

The four years prior to Brown taking over at Troy, the Trojans were 17-31 with only two bowl wins in fourteen seasons under previous coach Larry Blakeney.  After an initial rebuilding year for Brown in his first season at Troy, he immediately turned the team into a winner, a team that could compete with any of the larger schools on their schedule and actually win games previously considered automatic losses.

Wins at LSU at Death Valley in Baton Rouge, Louisiana (snapping the Tigers’ 46 game non-conference home win streak), against Nebraska in Lincoln and only losing by 6 points (30-24) to then #1 ranked Clemson Tigers proved that a team coached by Brown could never be counted out.

In other words, Neal Brown created absolute magic in Troy and it’s unlikely that it will recreated anytime soon under new Head Coach Chip Lindsey, who was successful as an offensive coordinator at Southern Miss, Arizona State, Auburn and Kansas but has never had any collegiate head coaching experience.

Brown’s teams have always been opportunistic and ready, regardless of who they are playing, and while his departure from Troy was a huge loss that will set their program back for years, West Virginia got one of the smartest young coaches in college football, who is capable of beating any team on any given Saturday.