The Mountaineers Will Be a Top 25 Team Next Week 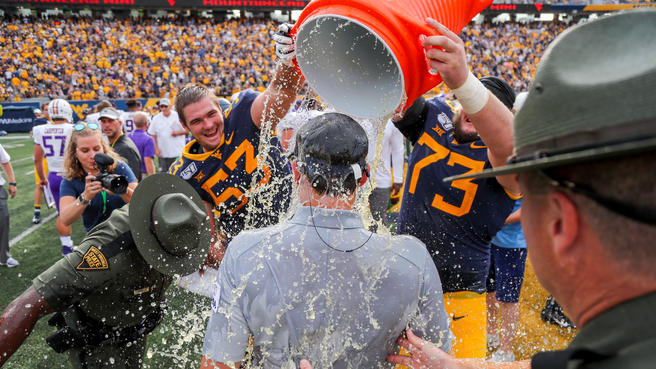 When West Virginia beats the Texas Longhorns on Saturday, they will do something that no one – not the experts, not fans of the team, not even the most optimistic of us – thought possible; they will likely move into the Top 25 and deservedly so.

For a team that was picked to finish at or near the bottom of the Big 12 conference, making an appearance in the Top 25 in the country at any point during the season would be shocking.  Beating the 11th ranked team in the nation, a team that also happens to be a conference rival, would likely jettison the Mountaineers up the rankings and into a territory previously considered impossible for a young, inexperienced team who is being led by a first-year Head Coach in the Big 12.

Upsets happen every week and the schedule this weekend is ripe with opportunities for teams at the bottom half of the Top 25 to be defeated.  While it’s important for the team to not look ahead and focus on the team they play this weekend, if the Mountaineers are able to beat Texas this Saturday they will play a talented but beatable Iowa State team at home the following weekend.

A potential 5-1 overall record and a 3-0 conference record was unthinkable at the start of the season and now it seems like a real possibility.  A loss at Missouri, a talented 3-1 SEC team, is not as devastating as it once seemed.  The Mountaineers have already overachieved and a win against Texas (and Iowa State) would bolster West Virginia into the Top 25 while sitting atop the Big 12 Conference one third of the way through the conference schedule.