The Mountaineers have already made their first mistake of the season 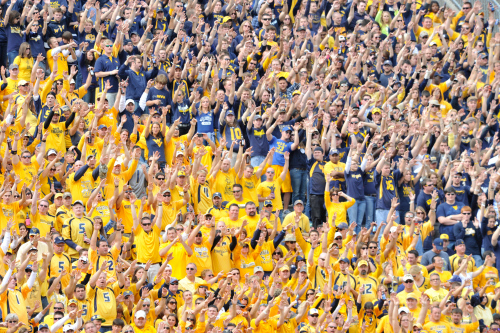 There hasn’t been a flag thrown, a fumble dropped, a pass intercepted or a tackled whiffed. But make no mistake, West Virginia has already committed what has the potential to be a deadly gaffe in the 2019 football season.

Saturday evening the Mountaineers host FCS powerhouse James Madison. And therein lies what could be a historically fatal miscue.

West Virginia should have never scheduled this game. Almost every FBS school hosts an FCS opponent annually, often in the opener. These games serve a twofold purpose for the FBS team. They are defacto preseason games, giving the host team a way to ease into the season. They also offer the host team an easy, almost guaranteed victory.

For the FCS team, here are the top three motivations for serving itself as a Christian to the FBS lions: 1. Money. 2. Money. 3. Money.

It’s an unsavory and controversial fact of Division I football life. It might not be pretty, but it is what it is.

But here is where WVU dropped the metaphorical ball. This game, against the particular team, should have never been scheduled.

Go back to the reasons a team like West Virginia schedules a game like this: an easy, guaranteed victory. James Madison offers nothing of the sort. Ranked No. 2 in  the preseason FCS coaches poll, the Dukes are 6-point underdogs Saturday in Morgantown. To understand how close that is, last year, on a neutral field, WVU was favorite by 10 against Tennessee.

So in a game that’s main purpose is to serve as a guaranteed W, the Mountaineers scheduled a team that looks to present a bigger challenge than did a traditional SEC power.

There is no upside, perception wise, to playing FCS schools. No matter how much you win by, the expectation is for an easy win. And if you lose, you get destroyed in the public. No one cares how good the FCS school is, win or lose.

Given that, the only sensible route to scheduling these games is to schedule bad FCS teams. You get no credit for a win and no leeway for a lose. It is completely senseless to schedule a good FCS team.

Which is exactly what West Virginia has done.

In 2007, Michigan hosted Appalachian State. The Wolverines were ranked No. 5 in the country and had high hopes for the season. Appalachian State was seen as the typical FCS cannon fodder for Michigan to get its warm up victory.

But Appalachian State was an absolute FCS juggernaut at the time. ASU was ranked No. 1 in the division coming into the game. And the ASU Mountaineers shocked the college football world and beat Michigan, 34-32. Michigan was the laughingstock of the college football world. No one cared that ASU was a great FCS team. All that anyone noticed was Michigan lost to a lower division team a the Big House.

At the end of the year, Michigan was replacing Carr with West Virginia coach Rich Rodriguez. If Michigan has scheduled more wisely, it’s likely Rodriguez would have been WVU’s coach in 2008.

It’s mind boggling why the WVU athletic department would take this risk. There are many regionally convenient FCS schools with far less pedigree than JMU that would have served as a no-risk opponent. Sources told Mountaineer Sports the James Madison payout for the game is $1.1 million. Sources said lesser opponents are available for less than half that.

As a thriving FCS powerhouse, James Madison will bring a (relatively) solid fan contingent. But surely, the greater traveling fan base the Dukes provide does not offset both the risk and the high payout that comes with the game.

There aren’t many easy formulas in big time college football. But this is one of them. When scheduling FCS opponents, schedule from the bottom of that barrel. Nothing good, and a lot bad, can come from dealing from the top of the FCS deck.