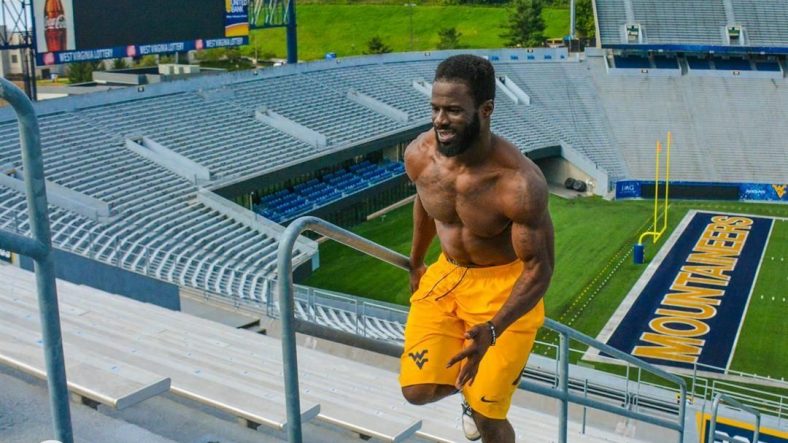 Noel Devine’s lack of opportunity to play football professionally is an incredible injustice.  His choice to walk away from his one chance is even more baffling.  Devine is the most talented, most spectacular player (sorry, Pat White and Major Harris!)  to ever play for the Mountaineers.  A 5 star recruit with a 0.9957 247 Sports rating out of high school, Devine was the #6 overall ranked prospect in the nation.

When Devine came to West Virginia University, he was unlike anything that Mountaineer fans had ever seen before.  Devine “is a special talent, one that comes along rarely,” said Jamie Newberg, a recruiting analyst for SuperPrep at the time.

Devine lived up to the hype while at WVU.  He rushed for 4,315 yards and 29 touchdowns in his four years as a Mountaineer.  He would have been even more productive but suffered an ankle injury during his Senior season.  His ankle injury combined with his lack of size and a perceived unwillingness to block made this extraordinary talent undraftable by NFL teams.  He was unable to participate in the NFL Combine due to his ankle injury and this further hurt his chances at being drafted.

In addition, NFL scouts are notoriously short-sighted and that was certainly the case with Devine.  Barry Sanders’ vision and slipperiness were the best in NFL history, but Devine was faster and perhaps as elusive with similar size.  He shared the qualities of one of the very best of all time in the NFL but went round after round, pick after pick without being drafted.

Devine signed as an undrafted free agent with the Philadelphia Eagles.  His time with the Eagles last 4 days.  After two days into training camp, he simply walked away from the team.  There were already concerns about Devine and this terrible decision essentially ended his chances of ever playing professionally again. Final nail in the coffin.  A choice bred out of frustration from an immature 23 year old is something that a more mature man undoubtedly regrets.

After a largely disappointing time in the Canadian Football League and a brief stint in The Spring League, an instructional league to showcase professional football talent, Devine retired.   He now plays in the American Arena League for the Wheeling Roughriders.  The Roughriders, who have several former WVU players including Jarrett Brown, Ellis Lankster and Robert Sands, recently won the American Arena League Championship in Wheeling.

While WVU is loaded with incredible talent in the backfield this year, no running back that suits up for the Mountaineers will ever be as extraordinary as Noel Devine.