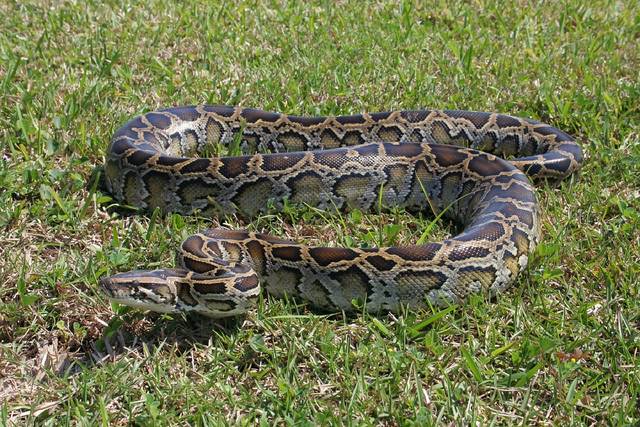 The Hunt for the Morgantown Snake, “Rich Rodriguez”

The Hunt for the Morgantown Snake, “Rich Rodriguez”

I hope the 15 foot python in Morgantown is never caught.  Snakes are wild and should be allowed to live their lives in the wild.  A python cannot survive through a West Virginia winter, but these next 3-6 months of its life will likely be its best ever.

Rather than hunting for it and trying to capture it, it should become a part of Morgantown and given a clever name.  I like “Rich Rodriguez” as its name.  This is a name all West Virginians could embrace for a snake on the loose in Morgantown.

Leave “Rich Rodriguez” alone and let him live out his remaining time as a Morgantown legend.  If he eats a few small pets, so what?  It’s extraordinarily unlikely that a python would attack and kill a small child.

Police issued a warning asking for Morgantown residents to pay close attention to small pets and children while outside until the python is caught.  Anyone that encounters the snake should call 911 immediately, according to the Morgantown Police Department’s news release.

The #Morgantown Police Department are searching for a large python in the Sabraton Area. Anyone with information is asked to call 911 immediately. For more information visit the link below. https://t.co/WO2WuyHoUk pic.twitter.com/rDy5hwhleU

The python has caused a bit of hysteria in Morgantown with crews consisting of lay people, police officers and wildlife experts searching for it.  Below, a resident that lives in the house next to where the snake was last seen and two women from the pet store on the Mileground, the Exotic Jungle, are pictured.  They took over the hunt for the snake after police officers were called to another scene.  “Rich Rodriguez” should not worry about being caught with these three on the pursuit of him.

PYTHON PURSUIT update: Morgantown Police had to rush to another call so now these 3 are leading the #pythonpursuit charge. One homeowner and 2 women from Exotic Jungle Pet Superstore in #Morgantown. @KDKA pic.twitter.com/KkekixvKEM

The truth is, this snake is not a real threat to any of Mogantown’s residents.  In fact, the overwhelming coverage of the snake is more of a commentary on today’s media and its overreaction to non-news.  The best thing that has come from the python escaping and being loose in Morgantown is the Twitter account, “Morgantown Snake”, which has provided its nearly 2,000 followers with outstanding commentary over the weekend.

Just looking at the night sky and wondering how the hell I ended up in this mess. https://t.co/24Iv7wdrfu

This Twitter account has captured the personality of this python perfectly.  However, the “Morgantown Snake” is not a catchy name.  Change the name to “Rich Rodriguez” and keep up the good work.

How much is Randy Mazey worth?
Most Valuable Returning Player in the Big 12?