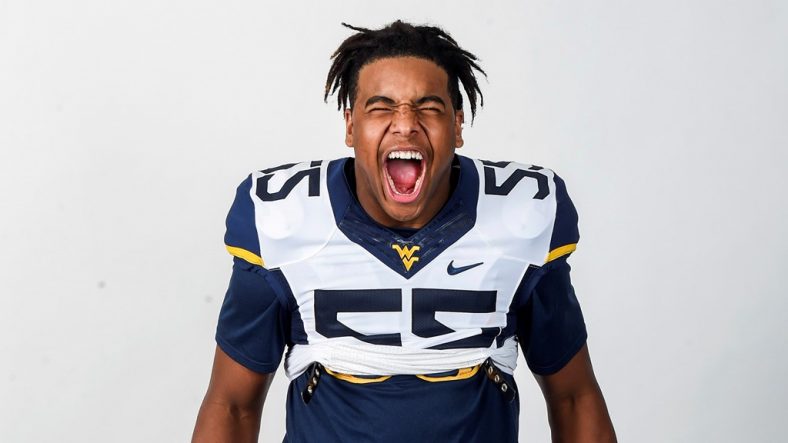 Dante Stills, the 6’3 292 pound defensive lineman from Fairmont, WV, will one day likely be the all-time sacks leader at West Virginia University.  Canute Curtis, a WVU Sports Hall of Famer who went on to play six seasons with the Cincinnati Bengals in the NFL, finished his Mountaineer career with 35 sacks.  Stills, who registered 3 sacks during his Freshman season last year in limited snaps, is 33 sacks away from passing Curtis.  This, of course, means that he would have to average 11 sacks per season for the next three seasons.

Although this is a difficult task, with more snaps and his rare combination of size, speed, athleticism, intelligence and desire to be the best, Stills has everything it takes to break the record held by Canute Curtis for over 20 years. Dante Stills absolutely lives in the backfield.  West Virginia fans are extremely fortunate to get to watch him terrorize Big 12 offenses and lead the Mountaineer defense for the next three seasons.

According to former Defensive Coach Tony Gibson, ““He’s 292 pounds and moves like he’s 240.  “He’s different.  I haven’t seen a freshman like that on the D-line walk though these doors in a long time. In my 13 years here, I’d be hard-pressed to say we’ve ever had one like that.  He’s got good genes.”

Stills is the son of former West Virginia great, Gary Stills, who happens to be 2nd all-time at WVU with 26 sacks.  As he continues to develop, he will likely become an even more impressive pass-rusher than his father, who played 10 seasons with the Kansas City Chiefs, Baltimore Ravens and the then-St. Louis Rams.

Stills was an ESPN Freshman All-American and ranked as the 2nd best True Freshman Edge Rusher with a Defender grade of 79.1 behind only Clemson’s Xavier Thomas, according to Pro Football Focus.  Dante Stills is a special player and we’ve only seen the beginning of what he’s going to do.  A true West Virginian that loves his state, Stills could go down in history as one of the best defensive players in school history and will likely have a very successful career in the National Football League in the future.