The Deuce is Loose 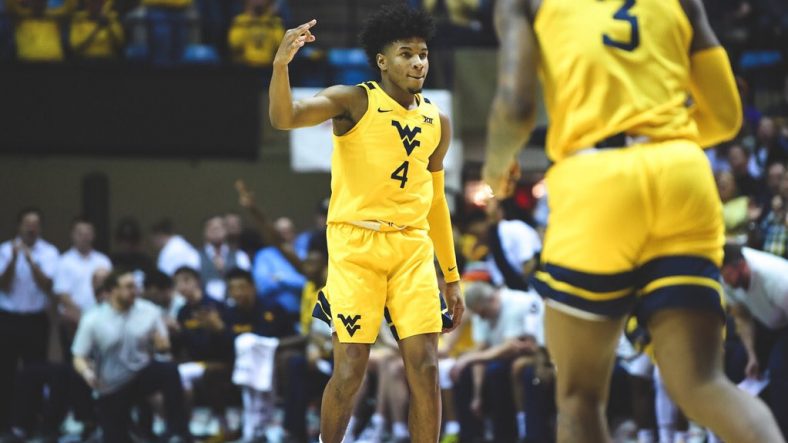 Miles McBride went the extra mile tonight as the Mountaineers defeated a surprisingly good Morehead State team 84-67.  The win earned Bob Huggins his 900th career win and more importantly to Bob, advanced WVU to the second round to face our old nemesis Syracuse.

McBride’s stat line was beyond impressive.  He finished with 30 points, 6 rebounds, and 6 assists.  More importantly, he had zero turnovers and played great defense.  As a matter of fact, the entire Mountaineer team only turned the ball over 6 times in the game!  6 turnovers combined with 9 of 18 three-point shooting is a formula for success no matter what team is playing.

Somewhere in the second half, Lisa, doing play-by-play for the game, commented that the Deuce was loose.  I’ll choose to ignore her calling us Virginia as we went into halftime.  I’ll assume that was a slip of the tongue and not ignorance.  However, her comment about McBride was spot on.  His steady play had him scoring from all over the offensive end of the court, even when he was being hit up beside the head while scoring a flurry of points in less than a minute.

Jalen Bridges also played a tremendous game going 6 of 8 from the field and 3 of 5 from beyond the 3 point line.  His play complimented McBride’s and was needed in the first half to offset a poor half by Derek Culver.  In the first half, he was clearly outplayed by Morehead State’s talented freshman Johni Broome.  The second half was a different story as Culver outplayed the freshman finishing with 12 points, 7 rebounds, and 3 blocked shots.

West Virginia was never seriously threatened in the second half and the victory was a milestone for Huggins.  After the game, the teams surrounded him as his players hugged him and honored his milestone.  It was a great scene to behold, but I’m sure Huggins has his eyes on win 905 that he hopes to earn in this tournament.

This leads me to a question I would like to ask Mountaineer fans reading this to answer in the comments section.  Why do you think Bob Huggins was once again passed over for the hall of fame?