The Day Will Grier SHATTERED the National Passing Yards Record 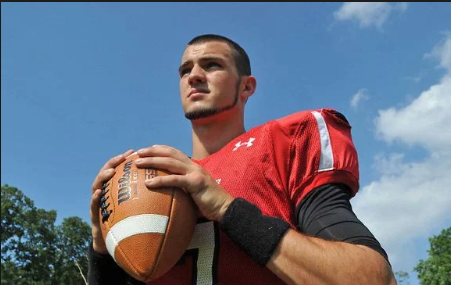 Will Grier was Will Grier before he ever became that highly touted recruit who went 6-0 as a starter for the Florida Gators before being suspended for testing positive for a banned substance.  Before he was Will Grier, the West Virginia Mountaineer who threw for over 7,000 yards, 70 touchdowns and finished 4th in the Heisman race while raising a beautiful daughter with his wife, he was Will Grier the high school phenom.

Before his brothers Nash and Hayes became social media sensations, Will was breaking national high school passing records.  Before he was drafted in the NFL Draft by his hometown Carolina Panthers to back up Cam Newton and possibly the quarterback of that franchise’s future, Will Grier had one of the most marvelous, impressive days in the history of high school football.

On November 12, 2012, Will Grier, as a Junior playing for Davidson Day High School, played against Harrells Christian in the North Carolina high school playoffs.  It was a back and forth game, an absolute barn burner, a game filled with explosive offense and very little defense.  The final score was 104-80 as Grier and Davidson Day High School advanced in the playoffs.  The game lasted nearly four hours and the teams combined for 184 points, which broke the record of 142 combined points that was set in 1930.

Grier’s final stat line for the game was mind-blowing.  He finished 35-42, with 837 yards and 10 touchdowns.  This of course shattered the national high school record for passing yards in a game.  The previous single season record was held by David Koral from Los Angeles who threw for 764 yards in a game.

Following the game, it was typical Grier, putting the team before himself or personal accolades:  “”My goal is always to win; I’m not a stat guy,” Grier said. “I could really care less about records, just as long as we win. Looking back on it though it was like ‘Oh my goodness.’ Our offense was quick and we just had one of those nights where we were on. Our offensive line played their best game and the receivers kept making plays. You have to give credit to them.”

Regardless of how many records he will break or how many personal accolades he racks up, Will Grier is all about the team and all about winning.  Grier’s decision to skip the Camping World Bowl game last season to prepare for the NFL Draft might seem contradictory to that, but ultimately the game was meaningless and his whole future in the NFL was ahead of him.  With a family to support and the possibility of injury, Grier made the appropriate, smart decision.  Will Grier will always be a Mountaineer.

Highlights of Grier’s 837 yards, 10 touchdowns game in high school below: