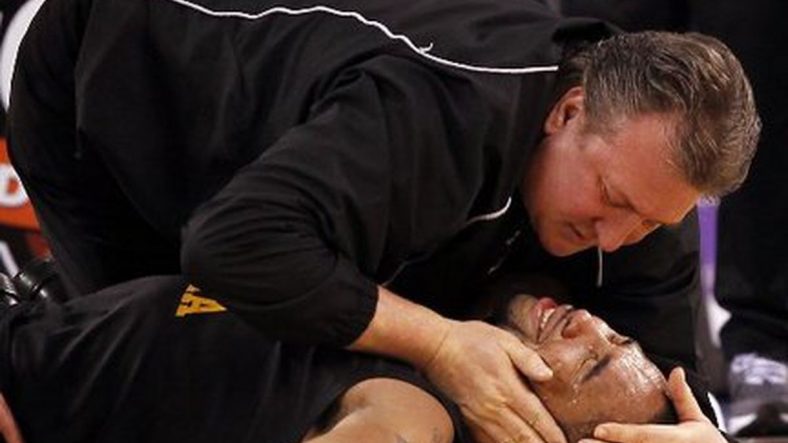 Da’Sean Butler, one of the best players in West Virginia University basketball history, had his collegiate career come to an abrupt end in one of the most worse ways imaginable.

During the 2010 NCAA Final Four, Butler drove to the basket and collided with Duke’s Brian Zoubek.  Butler, WVU’s warrior for four years, the player that showed so much toughness and grit for his entire career as a Mountaineer, fell to the ground and began screaming, crying, howling in pain.  It was later revealed that Butler had torn his ACL and sprained his ACL.  The pain of the injury, coupled with the realization that his career and championship hopes were likely finished, reduced WVU’s on-court leader to a helpless figure rolling around on the ground.

What followed immediately after the horrific injury came a moment that no West Virginia fan will ever forget.  Bob Huggins, the scowling, tough, intimidating coach walked over to check on Butler.  At first, he patted him on the stomach and told him that it was going to be okay.  Then, when he saw that the injury was obviously very bad, he dropped to his knees and hugged Butler, he whispered in his ear, he wiped away his tears, his tough-guy persona erased by real emotion, by real pain.

Huggs and His Unforgettable Moment With Da’Sean

West Virginia went on to lose to Duke 78-57.  During the National Championship game halftime show, Butler revealed what was said in that moment:

“Coach demanded my attention, he talked to me, and I was apologizing to him ‘Coach, I’m sorry I couldn’t get you your first national championship.’ I was really genuine about it and I apologized because I wasn’t playing that well and I wanted to let him know I really wanted to get him his first championship. All he said was ‘Don’t worry about it’ and ‘I love you’ and ‘You’re a special kid’ and ‘Don’t let this stop you from doing what you’re doing.’ He continued to say those things to me and it calmed me down … I’ll remember that moment the rest of my life.”

This was perhaps the first and only time that we got to see what all of Bob Huggins’ players see.  His passion, his love, his undying loyalty to his players was on full display in front of millions and millions of people.  Players have always said that he treats them differently than other coaches, that he truly loves and respects them, but we only ever got to see the tough-love side of him…until then.

Bob Huggins was already popular in the state of West Virginia, but this was the moment that he became “Huggy Bear” to us.  This one moment in time where he let his guard down, where he showed us just how much he loves the players on his team, transformed our state-wide collective vision of our coach.  When  players go down with injuries, most coaches walk over to check on the player and then go back to coaching while the trainers tend to the injury.

Bob Huggins couldn’t do that; not with a player that gave him everything he had for four years.   Bob Huggins wants what’s best for the young men on his team.  He wants them to be better men when they leave West Virginia University than when they got there and he will always support them during the good times and at the very worst moments.