The Bulgers are a Mountaineer Family 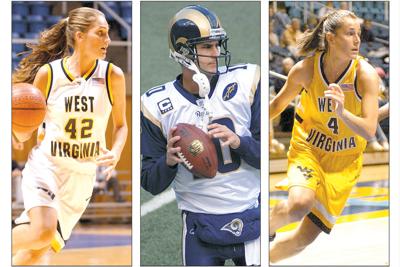 Three siblings of the Bulger family excelled at WVU as athletes, with the most recent being All-Big East basketball player Meg Bulger.

Older brother Marc took to Twitter to announce the “hat trick” by the Bulger siblings.

Meg is fifth all-time in scoring at WVU with 1,665 points. Her 663 points in 2005 was the fourth highest scoring season in West Virginia history. She was also a team captain, All-America honorable mention and All-Big East honoree. During her time in Morgantown she was one of top players in the Big East.

She is currently a sideline reporter and teams up with another former Mountaineer, Rasheed Marshall, who serves as the color commentator for AT&T SportsNet Pittsburgh. The two teamed up with Rob King to handle the season opener for the Mountaineers.

Congratulations to the Bulger family as they embody what it means to be a Mountaineer.