The Bridges of Marion County 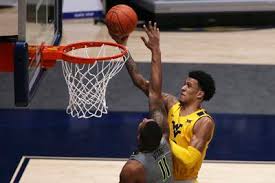 Years ago, tough guy Hollywood actor Clint Eastwood, played a photographer in a romantic movie opposite Meryl Streep.  He rented a room from her while her husband was away so he could go around the county and take photos of covered bridges.  As they say in the world of drama, he played against type.

career highs in both points and rebounds.  All season he’s been a contributor, but against TCU he was the star!

In typical Eastwood fashion, he’s calm, cool, and collected when engaged in a shootout.  When others on the court are playing out of control, along comes Bridges appearing as if his heart rate is normal, and he sinks a three!

Bridges ended the night with 22 points and 12 rebounds.  It seemed like a preview of coming attractions, and as Mountaineer fans we’re all anxiously awaiting to find out how good he’s going to be in the next few years.

Like Eastwood did when playing opposite Meryl Streep, Jalen showed a different side when off the co

urt and after the game.  On the court, he plays the strong silent type, but on the sideline, he could be seen appearing to be rocking a baby as a song courses through his mind.  After the game when asked about being a kid from Fairmont, Bridges responded that he was playing hard for his state.  People unfamiliar with West Virginia don’t understand the depth of our love for the Mountain State, but Jalen does because he’s one of us.

The way he talked about his father made the parents and sons and daughters among us appreciate a young man who loves his parents enough to listen, as Jalen clearly has done.  So, while most saw Bridges as the tough guy shooting out the lights and muscling down rebounds, we saw a different side that made this little drama a romance.

Thank you, Bridges, for making our day.