And Then There Were Two….The Backyard Brawl of Recruiting 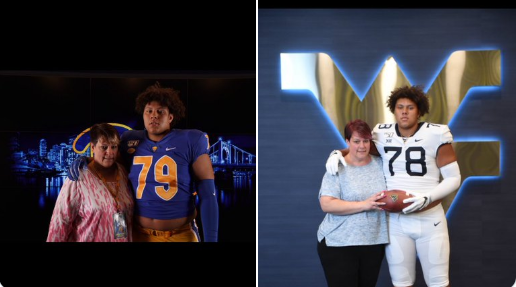 Though the Pitt Panthers and West Virginia Mountaineers haven’t faced off in football since 2011, that doesn’t mean the Backyard Brawl can’t go down in other aspects.  The Backyard Brawl of recruiting is going down when it comes to getting a commitment from 2020 offensive tackle Branson Taylor.

Stud offensive tackle Branson Taylor of Elyria Catholic (OH) has narrowed his choices of schools down to two. And wouldn’t you know it, the list consists of Pitt and West Virginia.

Taylor took to Twitter to announce his top two choices back in July:

Well, decision time is drawing near. Branson’s mother Heather took to Twitter to let the world know that her son will be choosing between Pitt and WVU Friday night.

Friday night @King_B_33 will be making his verbal commitment to either WVU or PITT!! I’m so incredibly proud of all of his hard work and most of all how he has stayed humble and hungry!! I Love you son!! You have made us all so proud !! #keepgrinding #stayfocused https://t.co/YNL7nJIXl5

With four-star New Jersey offensive lineman Chris Mayo already in the fold, Neal Brown is looking to put together an incredible class of offensive linemen in 2020.

Speaking of the Backyard Brawl, wherever Branson decides to go he will get to be a part of it the next time it happens, making things even more interesting. WVU and Pitt will open up the 2022 season at Heinz Field.

The recruitment from Pitt’s angle will definitely include a whole lot of 13-9 highlights. What else has there program accomplished in the last 20 years?

Regardless of where Mr. Taylor decides to go, it’s great that the finalists are West Virginia and Pitt. Gives fans the chance to go to war in Twitter threads. If you don’t believe me, take a look below Taylor’s tweet announcing his two finalists.

Come on home, Branson. Big things are on the way in Morgantown.