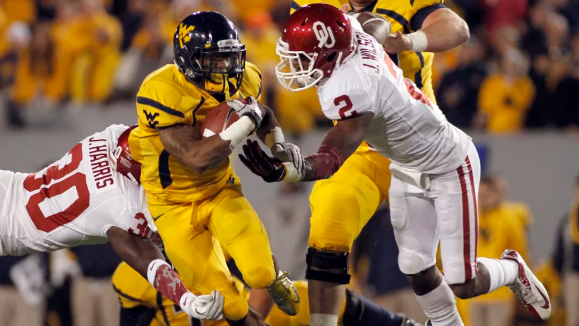 Tavon Austin was an all-time great while at West Virginia. When it came to leaving people in the dust in the open field, few have been better.

During their week 9 on Monday Night Football, players from both the Cowboys and Giants were allowed to sport stickers of their colleges on their helmet during their clash at MetLife Stadium in East Rutherford, New Jersey.

Dallas Cowboys Twitter posted a photo of Ezekiel Elliott and the worst color commentary guy in the history of the world repping the Buckeyes and Vols.

Former Mountaineer Tavon Austin is a Dallas Cowboy and he made Mountaineer fans proud when he came out with a flying WV sticker on the back his helmet.

We still love Tavon (even though he’s a Cowboy). Let’s take a look at some Tavon highlights from his time as a Mountaineer. Remember that time he had nearly 600 total yards in a single game against the Sooners?

Good to see Tavon repping the Mountaineers. The dangerous slot man has eight receptions for 90 yards on the season to go with a touchdown.