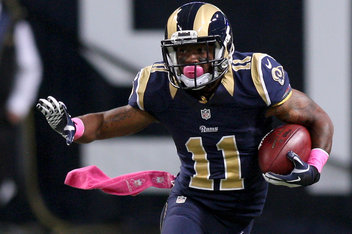 It’s a shame we can’t get all these WVU alumni on the same team!
Check it out:

For Austin, patience is not a virtue, but for right now it might qualify as a necessary evil. Four games into his NFL career, Austin hasn’t had any of his trademark explosive plays, the type of game-changers that he’s made his hallmark since he began playing football.

It’s a frustrating change of pace for Austin to wait around for big things to happen. That’s why he’s leaning on his team to remind him not to try so hard to make something happen that he begins pressing too hard.

“The coaches and other players do a good job of reminding me,” Austin said. “I do want to break out, but this game is a different type of game. I’ve got to be patient with it, and that’s what I will be, and eventually I will break out.”

In the first quarter of his first season, Austin has posted 20 catches for 124 yards with two touchdowns. Playing primarily as a slot receiver, it’s not unusual to have a per catch average under 10 yards, but Austin’s 6.2 average tells us two things: he has yet to break off a big gainer, and he has little to no room to run after the catch.

Those issues are essentially one in the same, and the Rams are well aware that they have to do a better job of scheming and game-planning so Austin isn’t inundated with tacklers as soon as he makes the catch.

“Well, what we’ve got to do is we’ve got to get the run after catch,” coach Jeff Fisher said. “We’ve got to get him in position to where he’s got a chance to make somebody miss and go. That’s just a matter of continuing to work on things, and maybe experiment with some different things.”