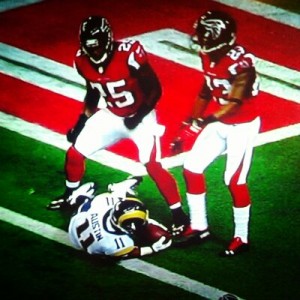 Good job Tavon!
Check it out:

After an uneventful preseason and Week 1 of the Regular Season, the Rams’ first round draft pick began to pay dividends on Sunday.

The team went on the road to face the Atlanta Falcons in a hostile environment. The Falcons, led by Matt Ryan and an interception returned for a touchdown by Osi Umenyiora, found themselves ahead of the Rams 24-3 at halftime.

Coming out of the half, the Rams made some offensive and defensive adjustments that allowed them to climb back into the game. They scored on two posessions in the third quarter. The second of which went to Austin, a 7-yard touchdown pass from Sam Bradford. The first of Austin’s career.