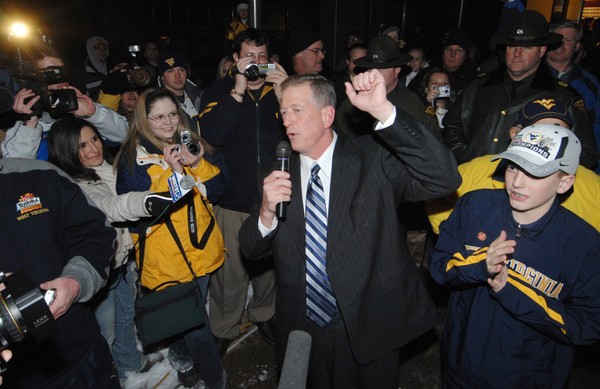 On Tuesday the Steelers announced the hiring of a third coaching assistant. The Steelers hire Blaine Stewart, the son of late WVU head coach Bill Stewart.

Blaine Stewart just finished up his playing career this past season. He was playing for Division II University of Charleston (WV). He was working on his Masters in Business Administration while also playing wide receiver.

We have hired Blaine Stewart as a coaching assistant.

This incredible video goes over the relationship between Mike Tomlin and the Stewart family.

Mike Tomlin has known Blaine Stewart since he was a baby. When Blaine was just nine months old his father placed him on the lap of his then-receivers coach Mike Tomlin.

A few years back Blaine and his mother Karen sat down with NFL Films and took the chance to discuss the relationship between Coach Tomlin and the Stewart family.

Bill Stewart passed away at age 59 due to a heart attack. This was not even a year after he resigned as West Virginia head coach after Dana Holgorsen was named head coach-in-waiting.

The day after his father passed, Blaine woke up to a text message from none other than Mike Tomlin. That’s the kind of relationship Tomlin has with Blaine and the rest of the Stewart family.

Blaine Stewart spent two years at James Madison serving as the holder on field goals and extra points. During his two year run at the University of Charleston he had 15 catches for 133 yards.

Congratulations to Blaine Stewart for landing a job fresh out of college with this incredible NFL organization. Best of luck in your new role and moving forward in your new career.

Steelers add coaching assistant: Blaine Stewart, son of former WVU coach Bill Stewart, who gave Mike Tomlin his start at VMI. Bill Stewart passed away in 2012, and Tomlin has kept in touch with his son, who just completed MBA program at Univ of Charleston.

And we can’t do a Bill Stewart article without mention of this magical moment. “Leave no doubt!”