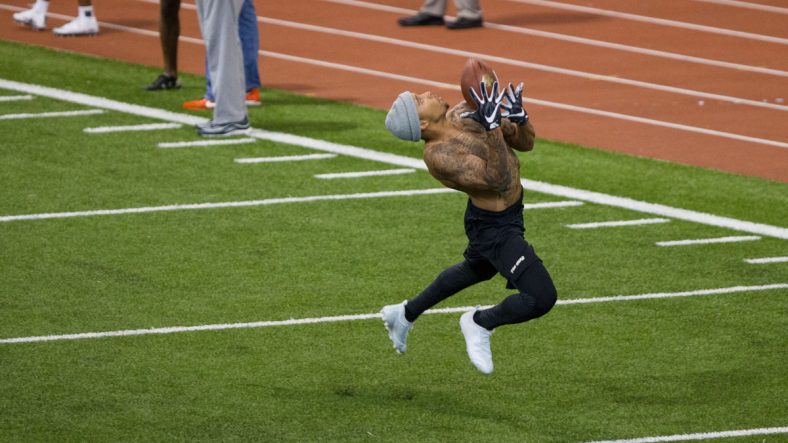 It’s been three years since former Mountaineer Stedman Bailey has played in the NFL, but he’s itching to get back. He took another huge step in recovering from being shot in the head during a drive-by incident where he ended up in critical condition. Most assumed his football days were over, but Stedman Bailey is getting closer to proving all of them wrong.

On Wednesday Stedman Bailey worked out at Marshall’s pro day with hopes of getting the attention of NFL scouts.

“I don’t think the Mountaineers would be happy to see this, but at the same time, those guys and everybody back in Morgantown knows what kind of mission I’m on,” Bailey said while speaking with the Huntington Herald-Dispatch. “This is the first opportunity for me to show scouts what I’ve got and how I’m feeling. I don’t care about the colors. I’m just here to capitalize on the opportunity.”

Bailey had surgery back in October where he had a plate inserted into his skull. This procedure “changed the game” when it comes to his return. According to the Herald-Dispatch, the plate is stronger than his skull bone and will help him be able to endure the hard hits he would take if he came back to the NFL.

Loved having Stedman Bailey at Marshall Pro Day today. Covered him in my former life as a sportswriter. Don’t knock the shirt, he said “I don’t care about the colors; I care about the opportunity.” Bailey wants to do WVU’s Pro Day, too, if he’s unsigned. pic.twitter.com/G2OUmHjgaf

Bailey has worked out with the coaching staffs of his alma mater West Virginia University as well as the St. Louis Rams. His goal is to get one more chance at the NFL and then go out on his terms.