Source: Trey Lowe To Get First Career Start Against Oklahoma 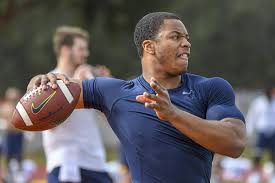 Multiple sources have started to leak reports that Trey Lowe, the Redshirt Freshman quarterback, will make his first start against Oklahoma on Saturday.

Although Neal Brown didn’t come out and exactly say it during his most recent press conference, hinted that he was considering Lowe after announcing that starting quarterback Austin Kendall was “certainly questionable” for WVU’s upcoming game.

Playing Trey Lowe would not only inject the Mountaineers’ offense with a much-needed spark, it would open up a huge range of possibilities in the playbook.

West Virginia’s run game will almost certainly immediately improve with Lowe running the Zone Read.  In addition,  Lowe will be very capable of running option plays and various other sets that are advantageous for dual threat quarterbacks.  Lowe gives the Mountaineers a chance against Oklahoma, regardless of how small that chance may be.

Brown will likely not make the announcement that Lowe is starting in order to prevent Oklahoma from preparing for the variety and flexibility that he brings to the West Virginia offense.  However, it now appears that Austin Kendall is not 100% percent, will not be ready to play and Trey Lowe will be the starting quarterback for the Mountaineers on Saturday.