Snoop Dogg Defends KU Show: ‘When You Pay For Snoop Dogg, You Gonna Get Snoop Dogg’ 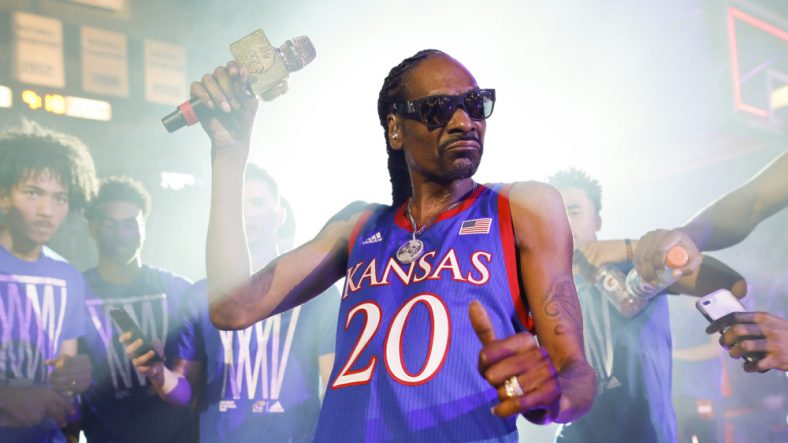 There is some serious backlash to rapper Snoop Dogg’s rowdy show last week in KU’s Late Night in the Phog. And now the hip hop mogul is reacting.

During the show last Friday at the Allen Fieldhouse there were pole dancers, a money gun and profanity. Remember, this is all going on while it was recently announced the Kansas basketball program is facing sanctions. When you factor the sanctions in, the fact that this show went down at The Phog is absolutely insane.

This is coming from a Kansas basketball program that has already been hit with major NCAA violations.

“We made it clear to the entertainers’ managers that we expected a clean version of the show and took additional steps to communicate to our fans, including moving the artist to the final act of the evening, to ensure that no basketball activities would be missed if anyone did not want to stay for his show.”

“I take full responsibility for not thoroughly vetting all the details of the performance and offer my personal apology to those who were offended. We strive to create a family atmosphere at Kansas and fell short of that this evening.”

While talking to Howard Stern, Snoop Dogg said the fans enjoyed themselves at the event.

“The audience enjoyed that s**t,” Snoop said. “I don’t know what the f**k they talking about.”

Snoop said he has a lot of respect for KU and doesn’t want to present them in a negative light.

“I think it was more the publicity of what I did,” Snoop said. “They had to cover it up. I respect them, and I wasn’t gonna put no smut on their name and say they did anything wrong because they invited me to come do what I do.”

Snoop did leave us with one incredible statement during the interview.

More Stories on the KU Scandals:

Isn’t it pretty obvious the Kansas men’s basketball program is just laughing in the face of the sanctions? It took some cajones to bust out Snoop Dogg and a money cannon with a massive investigation underway.