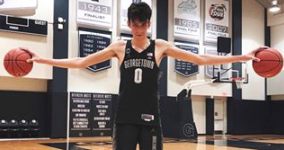 Holmgren is currently the #6 overall ranked prospect nationally, the top-ranked center and the top prospect in the state of Minnesota in the 2021 class.  He has the size, but it’s his incredible ball handling and perimeter play that helps him to stand out; think of a young, slender Dirk Nowitzki.  He can create his own shot from anywhere on the floor.  In an interview with Journal & Courier, Holmgren said, “The game is changing.  There’s no back-to-the basket anymore. Everybody has to be able to handle the ball and shoot.”

Beyond blessed to have received an offer from West Virginia University.‼️🤟🏼 pic.twitter.com/1rZD4j2Xru

Kansas and hometown state Minnesota appear to be the early favorites for Holmgren, but if Bob Huggins can get him on campus in Morgantown anything can happen.  In addition to be an offensive force, Holmgren is a defensive stopper and rim protector, blocking 15 shots in one game last season. His instinctive defensive ability would fit in nicely in Bob Huggins’ system.

Holmgren, an upcoming Junior, is currently averaging 16 points, 7.5 rebounds and 5.8 blocks per game on the UAA Circuit.  As you can see in the video below, Holmgren is a complete player, with the ability to create his own shots and shoot from anywhere on the court.  The issues he will face early in college is his durability and his lack of strength.  With a few months in the weight room he will have superstar potential.