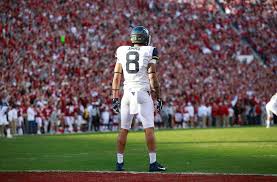 Marcus Simms, the former West Virginia wide receiver who entered the transfer portal this offseason before ultimately deciding to enter the NFL’s supplemental draft, has been waived by the Jacksonville Jaguars today.  Although he was not drafted in the supplemental draft, he signed a contract with the Jaguars on July 10th.  Simms was injured during training camp (concussion) and has not been able to practice with the team recently.  He also did not make the trip to Baltimore to play for the Jags in their preseason opener.

To replace the two they have signed WR Quandree Henderson, and LB Davis Tull.

While at WVU, Simms played in 33 career games, including 10 starts.  He averaged 63.5 yards and 4.2 catches per game last year and was the 3rd leading receiver for the Mountaineers with 46 catches, 699 yards and 2 touchdowns.  Simms would have likely been WVU’s go-to receiver this year, but instead decided he was ready to play in the NFL.  Simms is not eligible to return to college now that he signed a pro contract and will now have to look for a new home with another team in the NFL.