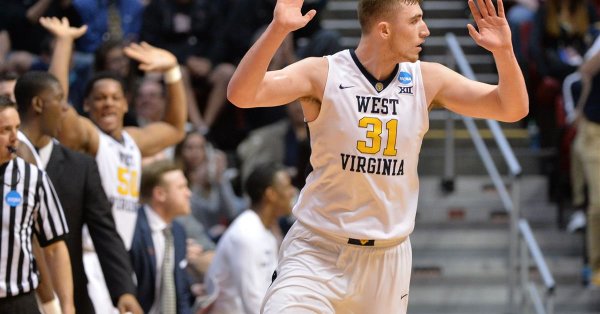 Last year the West Virginia Men’s basketball team had an extra scholarship. They decided to give it to Logan Routt, the worth walk-on. The 6-foot-11 Routt made good on the scholarship and provided the Mountaineers with the big body it needed for depth. Routt worked his way into being a contributor behind Sagaba Konate.

Our 13th and final scholarship has been issued for the 2017-18 season. Congratulations Logan Routt! pic.twitter.com/LV5JUyaGQF

Logan’s big moment was a dunk on the fast break during the NCAA Tournament. He followed up the big-time dunk with a big-time celebration: raising the roof. It was commemorated by being made part of the One Shining Moment video that was shown after the NCAA Championship Game.

After scouring the internet we were able to track down the half-second clip of Routt raising the roof. It happens at around 1:21 into the video.

This offseason, West Virginia had 12 players under scholarship, which is the NCAA limit. With the chance to add Emmitt Matthews, Huggins decided to pluck the scholarship from Routt. This was after Matthews was released from his letter-of-intent well after the signing date.

Routt, the consumate team player, was totally cool with it.

“He said that’s what we needed to do. I said, ‘OK,'” Routt said. “I listen to Huggs. He knows way more than I do. Whatever I need to do to help the team, that’s what he tells me I need to do.”

Though Routt will not get the athletic scholarship, he does qualify for the in-state PROMISE Scholarship. This covers either the cost of tuition and fees or $4,750 annually, whichever number is lower.

Thanks to the selflessness of Routt, Bob Huggins’ team is able to add another skilled scholarship player without sacrificing any depth under the basket. Good job by Routt putting the team above himself.