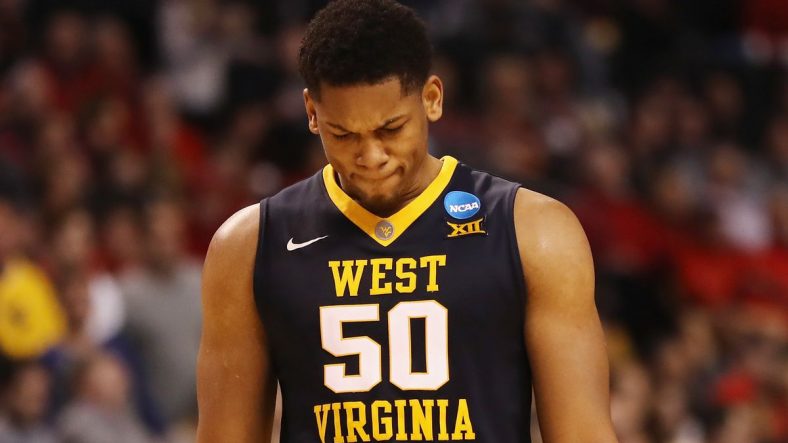 The NBA Draft takes place tonight at 7PM.  Sixty of the best young basketball players in the world will have their wildest dreams come true.  Sagaba Konate’s dreams could come true tonight, or more likely, they will come crashing back down to Earth.  After scouring the Internet, Konate’s name does not appear on any Mock Drafts, nor is there any indication anywhere that he will be drafted tonight.

Konate was a force during his Sophomore year at WVU, averaging 10.8 points, 7.6 rebounds and 3.2 blocks.  He was a All Big 12 Conference Third team selection and was on the Big 12 All Defensive Team.  He was a first team preseason All Big 12 selection going into his Junior year. However, a knee injury caused him to miss most of the season.  Despite only playing seven games this past season, Konate decided to forego his Senior year at WVU to enter the draft.

In addition to concerns about his injury, there were also great concerns about him being undersized for his position and his lack of a consistent perimeter shot.  He did receive an invite to the G League Elite Camp in May and performed well but was not invited to the actual NBA Draft Combine in Chicago.

Konate continued to train and work hard to make his dreams come true, but it appears that he will come just short of making that happen.  He could potentially sign with an NBA team as an undrafted free agent or grind his way to the NBA through the developmental G League.  More likely, however, is signing to play for a team overseas.

Unfortunately, it appears that the concerns of West Virginia fans and experts were valid.  Sagaba Konate should not have left early and should have returned for one more season at WVU.  It would be shocking to hear his name called during tonight’s NBA Draft, but we will certainly be hoping and praying for that to happen.

Be thankful for your blessings and never doubt your struggles. Don’t ask why it happened. Just be thankful for the strength it gave you.