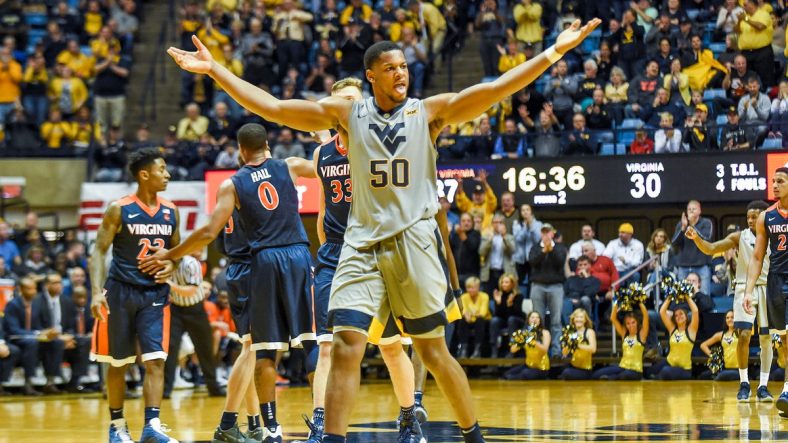 Mountaineer hoops fans are ecstatic about Sabaga Konate coming back to Morgantown for his junior season. Sags was named to the preseason all-Big 12 team. Fans are excited that they will get to take in his blocked shots, dunks, finger wags and all else that is Sags, instead of him being in the NBA or G-League.

Something very interesting happened in the Gold-Blue scrimmage. Sags took a couple three-pointers and made one of them. This wasn’t when the shot clock was running down. This wasn’t at the end of the half. It is something Konate has been working hard on coming into the season.

“I’ve put in a lot of work to extend out my shooting,” Konate said.

If you watch any NBA, you know that everyone is shooting threes these days. Even the big men. Sags came into Morgantown as a very raw prospect. The thought of him shooting threes was basically insane when you look back at the player he was as a freshman. This is a testament to the hard work Konate has put in.

Huggins then compared Konate to Kevin Jones. A guy who didn’t take any threes as a freshman, but ended up making 110 3s and shot 31.5% during his career.

“It’s kind of like Kevin Jones,” Bob Huggins said. “As K.J. continued to get better, he shot them more and more, and I think Sags will do the same thing.”

So far Konate has attempted zero three-pointers, but Konate is definitely looking to change that.

Another thing Konate is working on is being able to switch on all defenders. The NBA wants their 4 man to be able to switch because the NBA switches on everything now.

No one wants to see Konate picking up cheap fouls when he switches to a shifty point guard. With the athletic ability Sags possesses, this is something he can definitely add to the arsenal.

If a physical specimen like Konate can add threes to his arsenal, you are looking at a potential lottery pick for the NBA Draft.