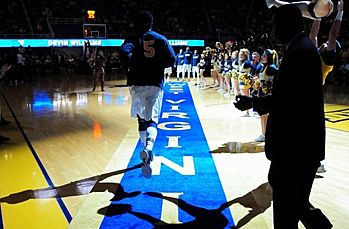 Roll Out The Carpet!

The history of the carpet used during player introductions at WVU basketball games.

Roll Out The Carpet!

I had this great idea to pose as a wealthy businessman who wanted to purchase the carpet that is used during WVU basketball player introductions at the Coliseum.  It is an interesting piece of WVU history that I claimed I would purchase for $100,000. I explained that I was born and raised in West Virginia and wanted the carpet as a conversation starter for when I had guests to my home.

It’s a perfectly absurd story that would have been amusing and entertaining for all readers of Mountaineer Sports.  Unfortunately no one at West Virginia University would cooperate.  All emails sent regarding the potential purchase of the carpet went unanswered.  Phone calls made to the Coliseum were re-routed and transferred and ultimately sent to voicemails that were not returned.

Although my initial premise fizzled, I thought that a history of the carpet would make for an interesting story.  I wanted to know its history, who it was made by, how much it cost to be made, if it’s the same original carpet that has always been used or if they replace it every so often.  Again, I couldn’t get any answers.  If you aren’t a part of WVU’s “secret society”, you simply don’t matter.

Big-timer John Antonik, The Director of Athletic Content for the West Virginia Department of Intercollegiate Athletics and author of four books on WVU sports that no one read, couldn’t be bothered to respond to my emails inquiring about the carpet’s history.  He’s far too busy sending out boring Tweets every 5 minutes and taking smug selfies of himself.

Antonik taking a break from his busy schedule to take a selfie.  Putting his glasses on top of his head was an interesting power move for this particular selfie.

Here’s what I could gather from the very limited information online about the carpet:

The carpet (should it be capitalized?)…The Carpet was started by Fred Schaus when he was the head coach in 1955.   Alex Mumford, who was the director of marketing for the Wunda Weve Carpet Company in Greenville, S.C., was a fan of West Virginia Basketball and brought the idea up to Schaus and Schaus thought it was a great way to sell tickets and bring excitement to the games.

West Virginia players also used special gold and blue basketballs, which seems like an incredible tradition that should have continued as well.  Both the Carpet and the painted basketballs were pretty forward-thinking, revolutionary ideas for the time.

“I tried to do this and I tried to do that and the carpet was one of those things,” Schaus recalled a few years before his death in 2005. “We were trying to sell tickets and if something extra could develop with the carpet, that would certainly fit into that mold.”

WVU made it to the Final Four and National Championship in the 1959-1960 season.  “Hot Rod” Hundley and Jerry West were among some of the very first players to run down the carpet and it has been a major part of the pre-game tradition of WVU basketball for most of the time since.  The tradition of “rolling out the carpet and bringing on the Mountaineers” was briefly stopped in the late 1960s by Scrooge Head Coach Bucky Waters.  The always “flashy and fun” Gale Catlett brought the tradition back in 1978 when he took over as the Head Coach at WVU.

This is a unique and interesting tradition that will continue to add to the awesome environment at the Coliseum during all pre-game festivities of West Virginia basketball games.