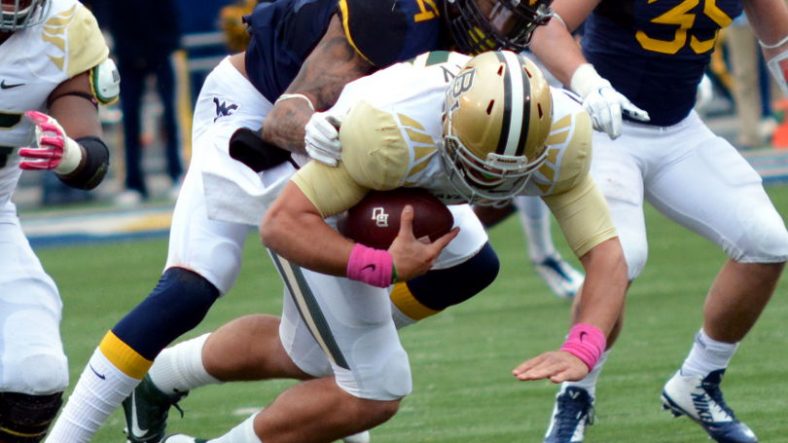 West Virginia pulled off one of its greatest victories in the 35 year history of Mountaineer Field on Saturday, defeating the #4 ranked Baylor Bears 41-27. The win was only the 5th ever against a top 5 opponent by the Mountaineers and the first in Morgantown since defeating #3 ranked Virginia Tech in 2003. The win brings the team’s record to 5-2 on the season and 3-1 in the Big 12. The Mountaineers actually control their own destiny in conference and will be crowned champions should they manage to win out. The team is also ranked #22 in the Associated Press poll and #25 in the coaches’ poll this week. It marks the first time West Virginia has been ranked since mid-way through the 2012 season.

While there were many exceptional performances on the field Saturday, the Mountaineer defense deserves special recognition. The defense limited Baylor to 318 yards of offense, their lowest total since the 2010 season. That is all the more impressive considering that both of WVU’s starting corners, Daryl Worley and Terrell Chestnut, went down to injury in the first half.

According to Riddick, the Mountaineers were neither surprised nor intimidated by anything Baylor did on offense.

“We knew they were going to try to tempo us and take some shots. They like to play fast, they like to throw it up to their receivers and give them chances,” Riddick said. “When it came down to it, we knew what they liked to do, and we were on top of it.”

In the end, the pressure served up by Riddick and the Mountaineer defensive front was just too much for the Bears’ offense to handle. Quarterback Bryce Petty was on his heels all afternoon and was never able to get comfortable, completing only 16 of his 36 passes on the day. All in all, it was an outstanding effort by the Mountaineers, one which they will hope to duplicate every game for the rest of the season.

Next up for West Virginia is a trip to Stillwater, Oklahoma to take on the Oklahoma State. The Cowboys are coming off a crushing 42-9 defeat at the hands of TCU, dropping their record to 5-2 on the season. Head coach Mike Gundy’s squad will surely be looking for revenge after last year’s upset loss in Morgantown. Saturday’s game kicks off at 3:30 Eastern and will be televised on ESPN.