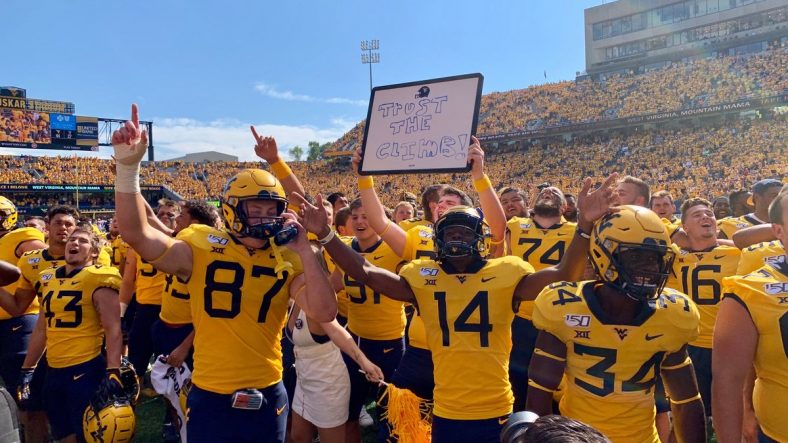 Can you imagine the moment that Head Coach Neal Brown realized that this year’s team would not be good enough to compete in the Big 12?  As a first year coach under the collective microscope of an entire state of football-loving fanatics, he must have immediately started to search for what to feed the masses to keep them at bay.

This is where the idiotic phrase “Trust the Climb” was created.  That phrase has been so overused that Mountaineer Sports will put a ban on it and every other West Virginian should follow suit by not uttering it ever again.

Brown is honest and his assessment of the team – or, more precisely what was left of the team – was revealed when his staff decided on the team’s catchphrase for this season.  What West Virginia University football’s marketing team thought how can we say that we really suck right now, to not have any expectations this year and to be patient without just coming right out and saying it?

Many teams use this type of deceptive marketing but it started with the Philadelphia 76ers of the National Basketball Association.  From 2012 through 2017 was mired in one of the very worst slumps in sports history, but had a real plan for success in their future.  Because of their poor record every year during this span, they had very high draft picks in the NBA Draft.  Joel Embiid, Jahlil Okafor, Ben Simmons and Markelle Fultz were selected and this led to the 76ers’ slogan of “Trust the Process.”  In other words, they were bad but they would get better.

The problem with West Virginia’s motto is that the Mountaineers are bad now and they don’t have the benefit of receiving top draft picks in exchange for poor seasons.  Brown was left with little, lost several key pieces of what he did have and now this will have to be built from scratch.

Brown has had success, but let’s be clear…that success was at Troy.  Brown appears to be an outstanding builder of football programs and certainly is going about it the right way, but to simply trust what he’s doing without questioning anything he does is utterly ridiculous.

Blind trust is for simpletons.  If Brown were Nick Saban, I might blindly trust him.  If Saban had one of the worst offenses in the nation half way through the season, I would trust that he would get it fixed.  I like Neal Brown but I simply can’t say the same for him.

For those who will inevitably say that I shouldn’t question him, that Neal Brown is above being questioned, that is precisely what I should be doing as the only writer in the state of West Virginia with the self-assurance to do so.  Just as it’s Neal Brown’s job to lead the Mountaineers back to prominence, it’s my duty to not simply trust the climb.