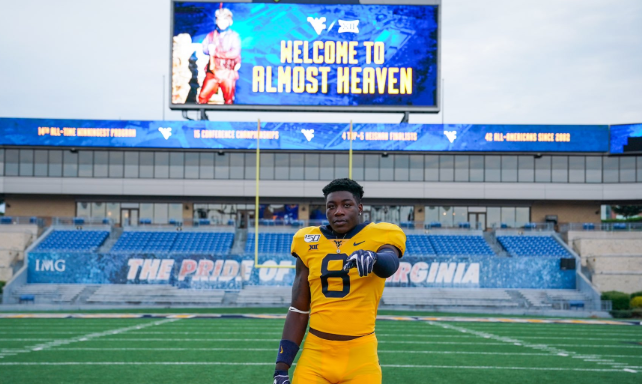 Quentin Williams Has a Key Omission From His Top Three

Quentin Williams Has a Key Omission From His Top Three

It’s no secret that WVU head coach Neal Brown would love to add Quentin Williams to the Class of 2020. Getting the defensive end to commit would go a long way toward solidifying the class.

There was a major obstacle keeping West Virginia from getting the Charlotte-native to commit: the North Carolina Tar Heels. An all too common foe for WVU on the recruiting trails. In fact, according to the not always reliable Crystal Ball Predictions at 247Sports, Williams had a 100% chance to go to UNC. Well, not anymore.

Williams released his top three and the big omission from the group was the University of North Carolina. The top three included Miami, Virginia Tech and the West Virginia Mountaineers.

Could West Virginia be on the brink of returning the favor from when North Carolina landed West Virginia-native Sean Martin? The Mountaineers are clearly in the running to do just that.

Losing defensive lineman recruits to the Tar Heels has been somewhat of a theme this offseason. A.J. Beatty of Pittsburgh is another defensive lineman that chose UNC over WVU. Getting a commitment from the coveted Williams would go a long way toward evening the score.

West Virginia squares off with old Big East rivals Virginia Tech and Miami. It will be interesting to see where Williams decides to go.

One thing is for sure: Neal Brown has West Virginia in the running for a lot of talented players on both sides of the ball.

The State of the WVU Football Team
Garrett Greene, Gearing Up for Greatness